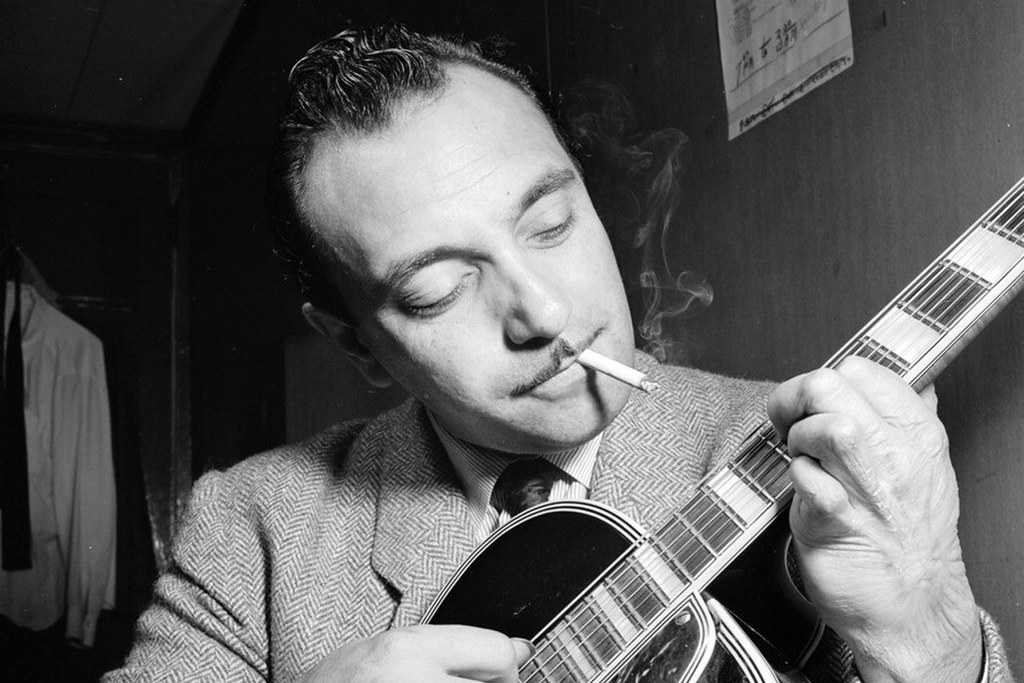 If Django Reinhardt’s name doesn’t instantly ring a bell, his music certainly will. Hearing it will transport you to a Parisian café or brasserie – his entrancing jazz has become synonymous with French café culture.

As the most famous, and arguably most iconic, European jazz musician of all time, Reinhardt’s life was as eventful as his music was influential. Jean – or ‘Django’ – Reinhardt was a Belgian-born Romani-French jazz musician who lived through most of the first half of the twentieth century. He combined the melodies of American jazz with the faster rhythms associated with Romani music, his innovative approach earning him an extensive following in the jazz world. This combination, along with his use of the acoustic guitar as a lead instrument, provided an avant-garde and fresh take, rethinking jazz after incorporating inspiration from other genres. Reinhardt’s music was unique in 1930s and ‘40s Europe and quite different to anything his contemporaries were producing.

What makes Reinhardt’s transfixing solos all the more impressive is that he was unable to read sheet music and, due to a devastating fire in his Romani wagon, only had three fully working fingers on his left hand for most of his career. The injuries he sustained compromised his ability to form certain chords – he had to completely relearn how to play guitar, making his skill and influence even more extraordinary and unique.

After meeting French-Italian violinist Stéphane Grappelli, the pair formed the Quintette du Hot Club de France, which went on to become one of the most famous and inventive jazz groups of the era – using only string instruments. The Quintette brought hot club jazz to the forefront of the European jazz scene, transforming a little-appreciated genre into one capable of rivalling great American swing artists like Duke Ellington and Louis Armstrong. By the late 1930s, Django Reinhardt, Stéphane Grappelli and the Quintette du Hot Club de France were the most famous European jazz musicians.

When the Second World War broke out, the Quintette were on tour in the UK; whilst Stéphane Grappelli opted to stay in Britain, Reinhardt returned to Paris, where his position as a Romani jazz musician in the Nazi-occupied city was a precarious one. The Nazis persecuted the Roma and Sinti peoples and saw jazz musicians as opponents of the regime. It is remarkable that Reinhardt, who was in the limelight as a Romani jazz musician, not only managed to survive the war, but also carried on performing live in Nazi-occupied Paris. In addition, he made seventy recordings of his music throughout the War, including liberation anthem ‘Nuages’. When Reinhardt eventually decided to leave occupied France, he was captured, and it was his good fortune that a jazz-loving Nazi officer allowed him to return to Paris unscathed.

Django Reinhardt changed the ways jazz could be played, and listened to, forever. He created a wonderfully mellifluous new type of jazz which could rival American swing, using his musical ear to write his solos and to develop his iconic guitar style despite the fact that a fire had compromised his ability to use his left hand. He made an astonishing number of recordings, producing over 900 sides between 1923 and 1953, using an instrument never before associated with leading a jazz band. One of the most notable and impressive aspects of Reinhardt’s life is that, although he came from a group which had been marginalised for centuries, and who were facing the worst persecution and genocide in their history, he still managed to create ground-breaking developments in jazz and gain widespread popularity doing what he loved. His Romani identity and family remained important to Reinhardt throughout his life; he would often just leave Paris to join his family for a few days, without even telling the Quintette.

In 1953, Reinhardt passed away at the age of just 43; however, his legacy lives on and continues to inspire musicians today. His children and grandchildren are musical; his second son Babik is a jazz guitarist and Babik’s son, David, leads his own jazz trio. However, the fact Reinhardt questioned assumptions of what the guitar was capable of has extended his influence to many modern guitarists too. When Black Sabbath’s Tony Iommi lost the tips of two fingers in an industrial accident, he was inspired to play guitar after hearing about Reindhardt’s right-handed technique. Jeff Beck, who played with Eric Clapton, referred to Reinhardt as ‘by far the most astonishing guitarist ever’. Joe Pass, one of the most renowned jazz guitarists of the 20th century, wrote an album called ‘For Django’ and there have been two films made about him.

With his smart suit, pencil moustache, slicked-back hair and a cigarette nestled between his lips, Reinhardt symbolises the archetypal French musician of the 1930s. He was brave, innovative, sometimes erratic and unreliable, but more than anything focused on creating and performing unique music which forever changed the face of jazz and expanded the boundaries of the acoustic guitar.