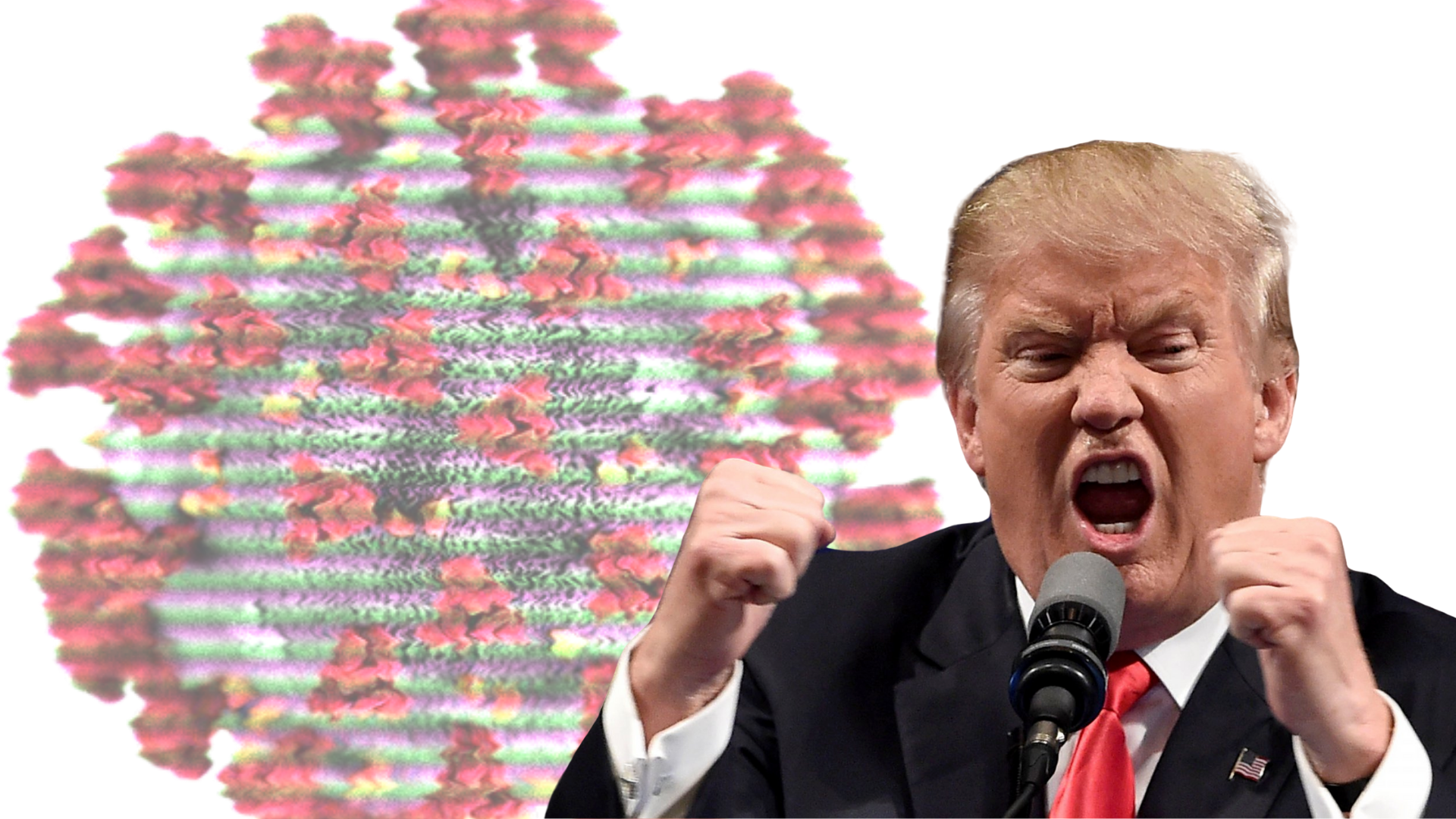 Amid the chaos of frightening facts and deadly conspiracy theories, we ask: do we prefer man-made disasters to natural ones? You’ve given us some of your opinions below.

Two days ago, I flew from London to my home in Washington DC. It was a seven-hour flight but already it feels like I’ve entered a parallel universe. Besides being isolated in my childhood bedroom rather than my grandmother’s guest room, the difference in news coverage of COVID-19 between here and the UK makes me feel like I’m on a different planet.

In the UK, the daily press conferences are informative and provide some sense of clarity in the government’s approach to the virus even if the officials don’t always give straightforward answers. But in the US, President Trump’s press briefings are a loopy mess of conspiracy theories about China, miracle cures, economic booms, and digs at Joe Biden. Clarity only comes when Dr. Anthony Fauci, the head of the US National Institute for Allergy and Infectious Disease, takes the podium to deliver the uncomfortable truth Trump refuses to.

Yesterday I turned to FOX News, to see what they’re talking about. It was strangely comforting- in a sort of Stockholm Syndrome way- because five minutes of Fox and you could believe that medication exists, vaccines are coming, tests are taking place nationwide, everyone has a wardrobe full of PPE which they’ll never use because by next week, we’ll all be out. It feels good to live in that alternative unreality.

FOX leads the pack in peddling in conspiracy theories and pseudo-science, and this isn’t new. We’ve seen it for years with climate change that they claim is just an anti-capitalist hoax. It seems that so long as a threat can be labelled as ‘man-made’ it is understandable, manageable, controllable, and conquerable. But a threat that is not man-made, that does not adhere to national borders or international alliances? It’s scary. The less we understand the problem the scarier it seems.

Hearing scientists talk about what they know about the virus, is to listen to them talk about what they don’t know about it. The journalists want simple, soundbite-length answers, but the scientists can’t comply. They talk of the research that is still needed and how far we are from cures and vaccines. Like climate change, more research leads to more questions about its impacts. Though we may not fully understand how the virus attacks our bodies, or how climate change is going to impact us all, that is not an excuse to bury our heads in the sand and ignore the information we do have just because it’s incomplete.

The Earth and the human body are both nature’s creations and humanity’s scientific knowledge is nowhere near understanding them fully. But man-made threats, we can understand and stop. Take the UN’s call for a global cease-fire during this pandemic, suddenly wars that have been ongoing for years, that seemed so complicated to stop, have stopped. Politicians and militia leaders made this decision. But there is no equivalent measure for disease outbreaks or hurricanes, they can’t be stopped just because suddenly our politicians have the will to do so.

Resolving or preventing natural disasters will implicate us all to act, no one will be excused from the effort. But it also will require politicians and nations to acknowledge the fact that scientific research, though confusing and often unsatisfying, is the only way to truly prepare for nature’s threats. Threats that will only get worse if we continue to ignore the research we already have.

Lauren: Our response to COVID-19 is nothing new

When I asked my mum if coronavirus feels like the most important thing she’s ever lived through, I wasn’t expecting the answer to be yes. She was born in 1968, so she’s seen the fall of the Berlin Wall, the invention of the internet, 9/11 – even the moon landing (just). My brother made the point that his and my generation is quite desensitised to events like this one, given that a lot has happened since the year 2000, and we’re less inclined to see their importance on a historic level. There might be something to connect this with the fact that by and large, it isn’t the ‘zoomers’ blaming this outbreak on China or on 5G telephone masts; this is very much a ‘boomer’ phenomenon.

The bigger a problem is, the greater our need to explain it. This is a survival mechanism – we need to understand a threat to our safety in order to protect ourselves from it. A natural reaction to crisis, it can manifest itself in odd ways when we’re faced with something that is truly inexplicable and just a chance of fate. The argument can be made that this wouldn’t have happened if we all stopped eating meat, but disease is as old as time itself, and unconquerable even by modern medicine.

A millennium or two ago, people would rationalise a plague as the act of a displeased god, or gods. In this context it’s easier to see why we might be inclined to blame technology, something also omnipotent and often misunderstood. Even more so when these ideas come from people who have an air of credibility: in March, a US doctor on disciplinary probation claimed that 5G poisons our cells, forcing them to excrete waste and therefore bringing on COVID-19. Ironically, the idea that ‘airwaves’ are harmful comes from our fear of change – in the 1990s, critics of mobile phone usage argued that exposure to 2G could in fact cause cancer. We know that this isn’t true, just as we know that this coronavirus spreads by human-to-human transmission and not from telephone masts. But the psychological reasoning behind conspiracies like these remains unchanged.

The effects of nature are a much harder thing to rationalise than is technological revolution, which is ultimately man-designed. It isn’t excusable to promote these theories if they cause real damage. Pinning the blame for the virus on China especially is unhelpful, and it also encourages racist and xenophobic statements. But we live in a world where climate disaster and ecological breakdown are becoming fast-approaching realities. Extreme weather in the past decade has shown even climate change deniers that nature is something we live on top of, rather than alongside, and that we can’t abuse it forever without facing the consequences. The coronavirus pandemic is a reminder of this too – while its impact could have been lessened with proper preparation, eradicating deadly disease is still beyond us. Conspiracy theories, as outlandish as they may be, can be far easier to face than reality.

Emily Passmore: Conspiracy theories reflect a desire to control our own fate

The coronavirus pandemic has had an extraordinary impact on the way we live our lives. Freedom of movement has been drastically curtailed. Our work or education has either been adapted, often changing significantly, or has been put on hold. The IMF has predicted an economic slump to rival the Great Depression. In short, it has made the normal functioning of society completely impossible.

Wanting something or someone to blame for this is a perfectly understandable response. Conspiracy theories blaming 5G networks or biological warfare for the pandemic make for a satisfying narrative, with a clear chain of cause and effect, and an obvious villain. Preventing future crises becomes a simple matter of removing this villain from our society, whether through economic sanctions and international law, or burning down your local 5G mast.

The true causes of the virus do not make for such a neat story. Viruses are part of nature and new viruses mutate by chance, not by design. Perhaps there is some blame to be apportioned over the spread of the virus; government responses at home and abroad have been far from ideal. However, there is nobody to blame for the creation of the virus itself. That was down to nature, and as no government could have anticipated the mutation, no government could have been prepared to completely shut down the virus.

Accepting this means accepting the massive role nature plays in determining the course of our lives. More specifically, it means accepting that if our lives are stable, it is ultimately a matter of luck – one act of nature could change our lives entirely. We are not the masters of our own destiny, individually or collectively; we are just one part of a massive ecosystem governed by chance and the laws of nature.

Yet the idea that we can control our fates is culturally embedded and psychologically comfortable. If COVID-19 is man-made, it still holds; there is some group of people orchestrating the crisis, and in disempowering them, we can end the crisis. Each stage can be explained by someone’s decisive action. But, if the virus spawned naturally, nobody is in control, and perhaps more importantly, there is no sure-fire way to prevent a similar crisis happening in the future.

Of course, we are not entirely powerless. Emergency measures have controlled the spread of the virus and prevented countless deaths. By changing attitudes to public health and crucially funding priorities, the impact of a potential future outbreak could be greatly reduced. Even so, the threat of a return to social distancing and quarantine would remain, throwing doubt on the future. There would be no triumphant return to the old status quo of not worrying about disease.

The prevalence of conspiracy theories claiming that COVID-19 is a man-made disaster doesn’t indicate a preference for man-made crises; it reveals a deep aversion to changing the way we think about society and the economy. Consider the climate crisis. There is robust scientific data proving the horrific damage humans have done and will continue to do to the environment. To avoid climate breakdown, there will need to be huge lifestyle shifts and economic restructuring.

Climate conspiracy theories centre around global warming being natural, or if global warming is a man-made phenomenon, the culprit will be one country – again, often China. This eliminates the need for real structural change.

Accepting that our decisions and actions are constrained by the natural world is uncomfortable and requires sacrificing our idealised vision of controlling our destinies. It is no surprise that some prefer to believe a fiction.