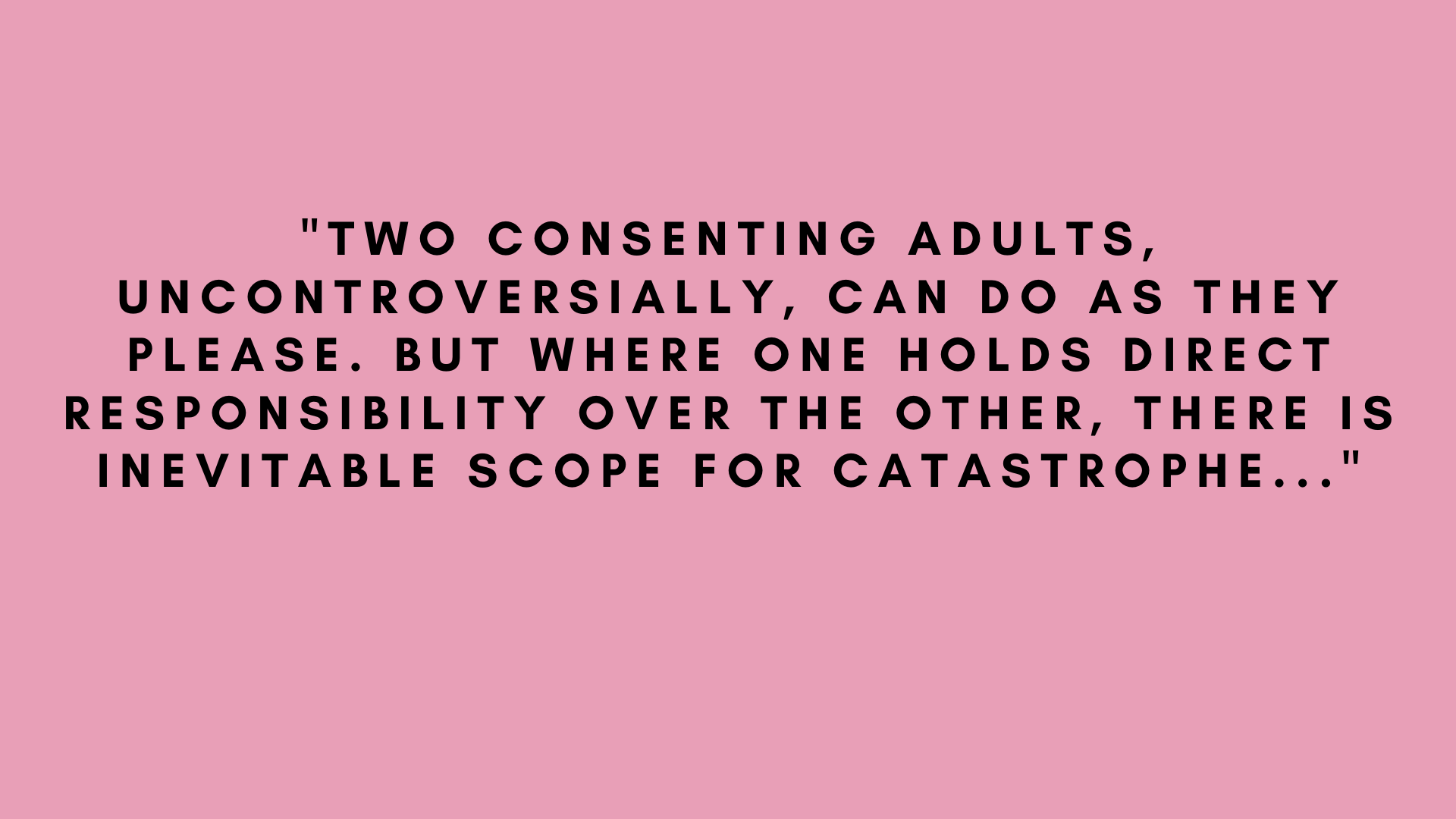 ‘Would you like a date?’ my tutor asked me plainly as our tutorial drew to a close. Stomach dropping slightly and the solid 2-1 I had received suddenly feeling somewhat less impressive, I glanced at my tute partner, staring at his shoes in palpable discomfort. I opened and closed my mouth several times, searching for an appropriate response. The seemingly never-ending silence jolted to a close when my tutoring whipped out a tray of dried dates and began to laugh loudly. The uneasiness, for the most part, floated away and we all chuckled. To his credit, the joke was pretty funny. It would have been far funnier, and the discomfort wholeheartedly discharged, if all parties were safe in the knowledge that a relationship between us was totally off the table.

The current state of Oxford University’s policy on relationships between staff and students strongly advises staff not to enter into a close personal or intimate relationship with a student for whom they have any responsibility. If such a relationship arises, the staff member should declare the relationship to their Head of Department. The declaration will so far as possible and subject to specific provisions, be treated in confidence and ‘every effort will be made to ensure that it does not disadvantage either party with regard to their professional advancement or academic progress’. Where staff fail to declare the relationship, disciplinary action may be taken. Relationships which arise in a college context will also be bound by college policies, which as it stands echo the university policy in almost every case. Nine colleges, as of 2017, do not even have a policy.

So the rule as it stands is relationships between staff and students they hold responsibility over are frowned upon, but there is nothing in place to state that they are unacceptable. This poses various problems. University policy articulates that there will be difficulties maintaining boundaries. Pillow-talk and problem sheets hardly go hand in hand. Promotion of positive learning environment, which Oxford University is universally renowned for, is undoubtedly disrupted by romantic and sexual relationships between the teachers and the taught. In my experience at least, building constructive relationship with my teachers is only improved by the knowledge that nothing I say or do will be misinterpreted as suggestive. It seems bizarre that academic rigour, often prioritised over hugely important factors at our university (read: quality of life), is essentially unregulated in this realm.

Possibility of favouritism and an undermining of trust in the academic process are also important reasons why a relationship in this context is problematic. A poor tute essay will undoubtedly be better received by someone you’re sleeping with. A friend of mine tells a story of a classmate with a reputation for low 2-2s receiving a seemingly inexplicable first in her dissertation, and marrying the man responsible for the grade a year later. Whether faith in the individual’s ability to be objective is justified or not, avoiding the need for guesswork would be nice. Especially at an institution as focused on academic success as Oxford.

Yet most troublesome is not the risk of cringe-worthy classes nor unwarranted academic wins. It is the ease with which exploitation could take hold. In 2017, The Guardian found that Oxford University had the highest number of student allegations of sexual misconduct by staff of any UK university. The 1752 Group, a UK-based research and lobby organisation dedicated to ending sexual harassment in high education, outlines the fact that where staff student relationships are not prohibited, there is a danger that staff feel it is still appropriate to make sexual or romantic advances towards students, despite the fact the vast majority of students feel uncomfortable with the prospect of romantic or sexual relationships between staff and students (The Power in the Academy Report). One Oxford college articulated that experience shows complaints of sexual harassment are sometimes met with genuine confusion from staff who simply ‘misread the signals’.

There is an inherent power dynamic in dealings between teacher and student, and efforts to impress on behalf of the student, perhaps particularly common at a place like Oxford, could arguably be misread quite easily. Though relatively harmless to the staff member, unwanted sexual advances can have devastating effects of students, who may lose confidence in themselves and in their college. A policy taking the possibility off the table would protect staff and students alike.

As of three years ago, Oxford had 11 allegations of staff on student harassment, the majority of which taking place at Pembroke and Queens, and scandals of staff sexual misconduct have arisen at an alarming rate this year alone. Less than six months ago, Pembroke College found itself somewhat at a loss to explain the story of Philosophy professor Peter King. Imprisoned for the possession of almost 3000 indecent images and fired by the Oxford college only the day before the hearing, King was previously cautioned by the police in 2007 following access of illegal material used for his research on the possibility of a morally acceptable form of child pornography.

In a story broken in February, the world learned that a tiny college of Cambridge University, Trinity Hall, had a string of intertwined cases. One involved the Senior Tutor accused of drugging and sexually assaulting a male student, which he vehemently denies. The second involved a male student, accused by three members of the college of both sexual assault and rape, investigated by the aforementioned Senior Tutor, with whom he is thought to have shared a close relationship owing to their mutual membership of a secret dining club. A third involved a fellow, who resigned in 2019 after allegations of sexual assault by students and was subsequently found to have been writing erotic fiction based on said students. It is the finding of the 1752 Group that ‘sexual misconduct doesn’t just affect the students who experience it; it affects the culture of…an entire institution’.

St Hugh’s College experienced a scandal of their own several years ago. Professor David Robertson, who passed away in 2017, was accused of ‘doing a Weinstein’ on his former students, allegedly conducting his tutorials dressed in a bathrobe, and once in a tiny towel. A subsequent inquiry found that the college should have been aware and taken appropriate action. In the following years, a new policy on prevention of sexual harassment came into play. St Hugh’s College now states that it is ‘always inappropriate for a member of staff to have a romantic or sexual relationship with any student for whom they have teaching, professional or pastoral responsibility’. Recognition of the power dynamics at play and the potential for exploitative behaviour, conscious or otherwise, seems to be the stimulus behind this decision.

It Happens Here has kick-started calls for the same change to come within Oxford colleges. The group, an autonomous SU campaign, is dedicated to preventing sexual abuse and supporting its survivors, and aims to further this goal through this campaign. It Happens Here chair-women Kemi Agunbiade and Clara Riedenstein stated that the group believes the ban will ‘protect both staff and students, ensuring the power dynamic that exists between them cannot be misused – as in these cases it can be difficult to distinguish consent and coercion’. The motion making the rounds of colleges currently, to be found here, should you wish to present it to their own JCR or MCR.

Two consenting adults, uncontroversially, can do as they please. But where one holds direct responsibility over the other, there is inevitable scope for catastrophe and as It Happens Here outlines, that the line between consent and coercion is easily blurred. In the knowledge that there remain staff of the payroll of certain Oxford colleges whose names can be typed into a Twitter search bar and met with a tirade of accusations of sexual misconduct, fair or otherwise, unease is unfortunately, necessary. Now is the time for colleges to follow in the footsteps of St Hugh’s. Security of students, and the academic experience they pay a hefty sum for, should be prioritised over the possibility of an unproblematic romance.