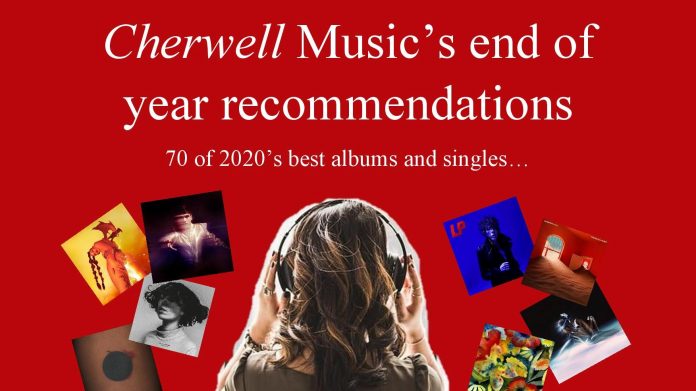 It’s been a testing year, but the music hasn’t stopped. From impressive debuts to lockdown albums from well-established favourites, 2020 has seen its fair share of new tunes. Yet the shared listening experience has seemed more precarious than ever: no live music; no sweaty, gleeful club nights; no new relationships to set against a carefully-curated soundtrack. Albums and songs have been digested solo, earbuds plugged back in while the UE Boom collects dust in a corner. So it is by recommending music to one another that we may find a new way of connecting through the sounds of the year 2020, from one locked-down household to another, from tier to tier.

As a parting gift, Cherwell wanted to get as many of its readers involved as possible, challenging contributors to review a selection of music released in 2020 in just one sentence – and they certainly delivered. So, here it is: Cherwell‘s list of albums and songs to listen to before the year ends.

A genre-defying rock album stepping on the patriarchy. Sophia Zu

Alina Baraz – It Was Divine

You think it’s chill, and then it hits you with something real. Lucie de Gentile

Bea Kristi diverges from her bedroom pop roots on this angsty, guitar-driven album, which is 90s to the core. Sofia Henderson

Smooth, sultry saxophone blends seamlessly with a noirish ambiance in the new set of Lynchian soundscapes from this German outfit, the acknowledged progenitors of ‘Dark Jazz’. Frank Milligan

On hating Nazis, daddy issues, and the apocalypse – the perfect album for 2020. Sophia Zu

The iconic kpop group’s self-written and produced lockdown album has some highlights, such as ‘Telepathy’, but is simply more of what we’ve heard before. Sofia Henderson

A punchy gift from the hyperpop genre, this lockdown-curated treat will simultaneously get you in the feelings and inspire you to dance alone in your room like the main character that you are. Jennifer Goodier

Lamenting children in cages, theocracy, the opioid epidemic, and gun control, Drive-By Truckers’ middle America sound weeps from within for the damage that can’t be reversed even once Biden is in office. Perfect to “stick up your ass with your useless thoughts and prayers”. Angela Eichhorst

Eartheater – Phoenix: Flames Are Dew Upon My Skin

A deeply personal, deeply sexual, utterly ethereal meeting of glitchy electronica and folk, with individual narratives of love, loss, and resurgence told in terms of primordial geological processes by one of the most singular voices in contemporary music. Alec Holt

A great instrumental/ambient album which has helped me in many a study crisis. Thomas Barker

Even if you’ve never liked piano albums, you have to try this one. Pretty modern-sounding but definitely not boring: Alexis is so skilled. Danny Roade

Remedy is honest, sensitive, and warm – these are songs written from the heart, for the soul. Katherine Schutte

JARV IS… – Beyond the Pale

Great and groovy tunes from the northern legend. Best track: ‘Must I Evolve?’ Thomas Barker

A truly Biblical experience, with Ka brutally detailing his life through allusion to the Hebrew Bible and unmatched lyricism. Oliver Hogg

The Killers – Imploding The Mirage

This album gives my younger Mr. Brightside-loving self some much needed nostalgia, and has re-ignited my love for The Killers (not that it ever really went away). Danielle Perro

Heartbreak and solitude have never been written about so tenderly. Sophia Zu

A great reissue of Lennon’s finest: great to walk to! Thomas Barker

The Bristol songwriter is Britain’s answer to Phoebe Bridgers – I knew the name from when my sister saw her supporting youtuber Dodie about 5 years ago, but the songs on BREACH are mature, many-layered, and infinitely cryable. Fred Waine

Channeling 1970s space vibes which Bowie would certainly be proud of, McKenna’s latest release deals sublimely with the ‘Key to Life on Earth’, all whilst in the musical realm of outer space. Jennifer Goodier

Zeros, in almost every way, is bigger than McKenna’s debut, taking on influences from the past to create a thought-provoking exploration of a complex world: a record full of urgency and theatrical crescendos. Elena Buccisano

I know nothing about the band Memnon Sa beyond the fact that this album is a swirling, majestic exploration of cosmic forces: The Comet Is Coming would be proud of that blistering sax and – is that the voice of Sinead O Brien, one of 2020’s outstanding British vocalists, on ‘Golden Ram Of The Sun’? Fred Waine

Delicious and a wonderful pick-me up. Angela Eichhorst

Album made by a six-year-old tiktoker. Orna Rifkin

A vital poetic rail against the racial and class-based discriminations of the US housing system, adapted from a 2019 stage production set in an imminent big-tech-ruled dystopia and soundtracked by the liberation technology that is free jazz. Alec Holt

Vocalist Moor Mother and producer Mental Jewelry combine for a gut punch of a rock album with a heavy punk ethos. Oliver Hogg

With this debut album, Fish Narc combines the nostalgic sounds of 90s/00s emo with subtle influences from hip-hop, offering an ode to pop-punk with an interesting twist. Charlie Croft

One of the most personal releases of the year from renaissance man Sage Elsesser, with a catchiness unparalleled in other abstract hip-hop releases. Oliver Hogg

A breathtaking collage of gunfire, muffled dialogue, and glitchy beats, inspired by experiences of the Angolan civil war. Fred Waine

Oh Wonder – No One Else Can Wear Your Crown

These are songs that make you feel alive. Katherine Schutte

Fresh off a pair of space-aged soundtracks for the Safdie brothers, Lopatin’s latest might be his most accessible yet, fusing elements of pop and psychedelia into his trademark collages of abstract electronics. Frank Milligan

One of the best beatmakers showing off his masterful sampling with super-replayable instrumentals. Danny Roade

If foreign rap is something you dabble in, PLK’s new album (French) is definitely worth a listen; also great for waking up on your way to a tute. Eva Vang-Mathisen

A good soundtrack to being a mess with confidence. Lucie de Gentile

San Cisco – Between You And Me

Songhoy Blues go rock! Probably the most important West African band of this century, the Malians add another layer of fuzz and swagger to their joyous desert-blues sound on Optimisme. Fred Waine

The Streets – None of Us Are Getting Out of This Alive

The Strokes – The New Abnormal

New York indie-rock legends produce a fittingly melancholic album after a seven year hiatus – and it has absolutely no skips. Sofia Henderson

There’s no better way to appreciate the immaculate presentation of time by Kevin Parker on this album than during lockdown, where both ‘One More Hour’ and ‘One More Year’ suddenly hold so much more significance. Jennifer Goodier

Not exactly unheard of but a definite new direction for Swift as a songwriter and a must-listen for Swifties and non-Swifties alike. Clementine Scott

Thundercat – It Is What It Is

Jazz training brought to bear on hip-hop and electronic genres – It Is What It Is forces you to stop and listen. Orna Rifkin

A genre-bending tour de force of rock, pop and soul from one of experimental music’s boldest figures, its songs as precisely constructed and visceral as they are radical in their aesthetic scope. Frank Milligan

‘Gospel For A New Century’ is an epic opening track that could get anyone into psych-rock, and Yves is such a character too. Danny Roade

As catchy and compulsively relistenable as anything you’ll hear this year, the Japanese quartet’s first of two 2020 releases sees their singular bubblegum approach to math rock at its most refined. Frank Milligan

The Swedish organist finds herself in even more ethereal territory than the song-oriented efforts of her past records, eschewing conventional structure in favour of a kind of liturgical drone. Frank Milligan

Born out of therapy, this relatively unconventional solo debut from Hayley Williams is a welcome and laudable progression from her Paramore roots. Deepra Sinha

Yaeji – WHAT WE DREW

In true cyber-punk style, BMTH attack the misery of lockdown in a series of apocalyptic ballads which serenade the ‘end’ of humanity as we know it. Jennifer Goodier

A raw take on heartbreak, this EP featuring the incredible Caroline Polachek simultaneously tugs on the heartstrings and supplies fiery emotional intensity, all within the space of 6 songs. Jennifer Goodier

As if being known as the next big thing in classical-EDM crossover wasn’t enough, London duo Jockstrap expand their palette on Wicked City to cover abstract hip-hop, stadium rock and opera. Fred Waine

Slauson Malone delivers an emotional storm on this melodic soundscape of plunderphonics and jazz, the title of which translates as ‘coming to terms with one’s past’. Oliver Hogg

After a year of waiting for the ever-delayed Wonder Woman 1984 movie, I have managed to find some respite in this orchestral version of the music from the original trailer (the fact that desperation has led me so far as to look for alternative versions of music from a trailer does add a particular 2020 flair to the experience as yet another let down in a long list). Aside from this discouraging context, the music itself is exciting, up-beat and takes the listener to a world of action which I would thoroughly recommend. Naomi Reiter

Great instrumental pieces from a lovely show that helped me cope in the first lockdown. Thomas Barker

A master of textural subtlety, Holter once again proves her versatility with this sometimes-poignant, always-anxious synth/horn soundtrack to one of the best films of 2020. Fred Waine

A stellar post-rock number from a group who somehow manage to sound simultaneously like Bill Ryder-Jones and Slint – guaranteed to be the best 15 minutes of your year. Fred Waine

Anything LP puts out is worth a listen – she’s only released two singles this year but rate them both. Eva Vang-Mathisen

Dubby, groovy, inspired – a wicked lead single from the London saxophonist who also has a strong case for having released the best jazz album of 2020. Fred Waine

One long smooth wave to ride on. Eva Vang-Mathisen

The contrast of the alt-rock instrumental and synths brings about an out of body experience while, ironically, Shrimp sings about being trapped. Charlie Croft

Huge thanks to all of our contributors and readers for a great Michaelmas!