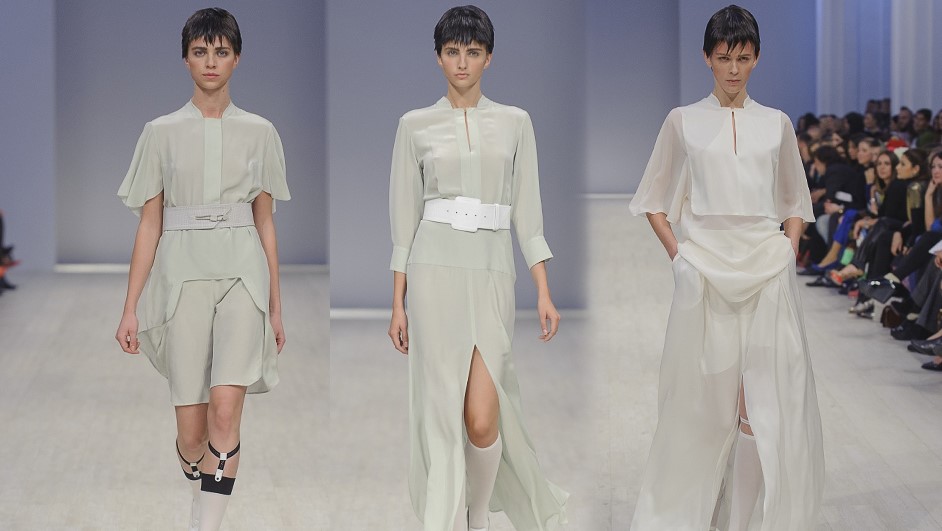 Gender fluid dressing has been steadily infiltrating fashion movements throughout the second half of the 20th century up until the present, with different takes on androgyny gaining recognition from Bowie to Grace Jones and beyond. Reflecting on our recent past, the examples that stick out are of men who pushed the boundaries of feminine dressing, rather than women. Female androgynous dressing has become the norm. Walking through the high street now, no one would bat an eyelid at a woman in an oversized men’s blazer or sweatshirt. I constantly steal my brothers’ clothes but the reverse is far less common. The key question now is how much further the boundaries in gendered fashion can be broken.

Of course, breaking down the barriers preventing men from wearing women’s clothing doesn’t mean dulling the fashion women wear to make it ‘suitable’, or ‘masculine enough’, for men, rather it allows men to be feminine and to wear clothes that accentuate femininity. Gender neutrality is perhaps the wrong term in relation to fashion; fashion can be masculine or feminine, if individuals choose, but these qualities shouldn’t simply be reserved for their traditionally prescribed genders. More fluidity in fashion, therefore, can only be a positive thing: give people the choice of how they want to express their identity through fashion, and freedom in gender expression will open up elsewhere. People who are non-binary deserve a fashion industry which supports this and allows this identity to flourish rather than be put in a binary box.

Anyone who has been on TikTok in the past six months will have seen the trend of ‘femboys’ wearing skirts in their videos, but this arguably doesn’t reflect a significant change when it comes to gender fluid fashion. The primary TikTok demographic, from young teens to young adults, is still very different from what you might be confronted with when you step outside your front door. And, even if there is criticism or hate within the app, there is an army of people ready to fight against it. Meanwhile, the idea of ‘femboy Fridays’ being seen as such a ‘trend’ is troubling in itself: does that mean it has to fade and move on along just as each dance movement disappears after its blip of fame?

For Vogue’s December issue, Harry Styles was chosen as the cover star. Decked out in feminine finery, the styling reflects a key change in the singer. In breaking out of his boy band cardboard cut-out role, he has developed his personal taste and embraced feminine fashion. From his seventies suits with pussy-bow blouses to bold jumpers and, of course, that iconic JW Anderson cardigan, he has become an inspiration for a modern fashion revolution. The next step for Harry: incorporate the skirts seen on him in December’s Vogue cover shoot into daily wear. Featuring some kilts, perhaps as a bridge across from ‘acceptably masculine’ styles. Stretching as far as all-out baby-blue tulle paired with a sleek black blazer, this history-making shoot, with Harry as the first male cover star for the revered magazine, made its mark. This was especially seen on social media, where many clashing opinions were expressed. Gen Z exalted in the freedom felt from such unashamed breaking down of barriers, while some far-right onlookers decided that Styles was threatening what a ‘manly man’ should be in a right-and-proper world.

Is it worrying that the shoot became seen as something so radical? By viewing it as such a grand statement, as some news outlets have presented it, perhaps we take something vital away from it. If the whole point was to normalise non-binary dressing, then why aren’t we, well, normalising it? When it becomes too much of a ‘big deal’, doesn’t it lose some of its power? But maybe this controversy was needed to spark a conversation and the battle is just not as far along as I had hoped; we need to break down the big barriers before the building blocks of non-binary dressing can come in to replace them.

The piece certainly defined a changing emphasis in the fashion industry which is currently bubbling up beneath the surface. As Vogue itself suggests in its interview of four up-and-coming designers: Nihl, Maximilian, Act N°1, and Situationist on their SS21 co-ed collections, the tide is turning, slowly but surely. Non-binary fashion allows inclusion of people of all genders, is more sustainable with fewer clothes are produced overall per collection, and has sparked some really interesting pieces which question the relationship between gender and fashion in a wearable, modern way. We can only hope that, as trends usually do, the co-ed conception of fashion will trickle down from high fashion into the high street, but not simply as a passing fad, rather a concrete change in the way we view clothes. I have faith that this change will come, and am ready to welcome it with open arms.