CherwellIndependent since 1920.
Life In Conversation with Jill Nalder 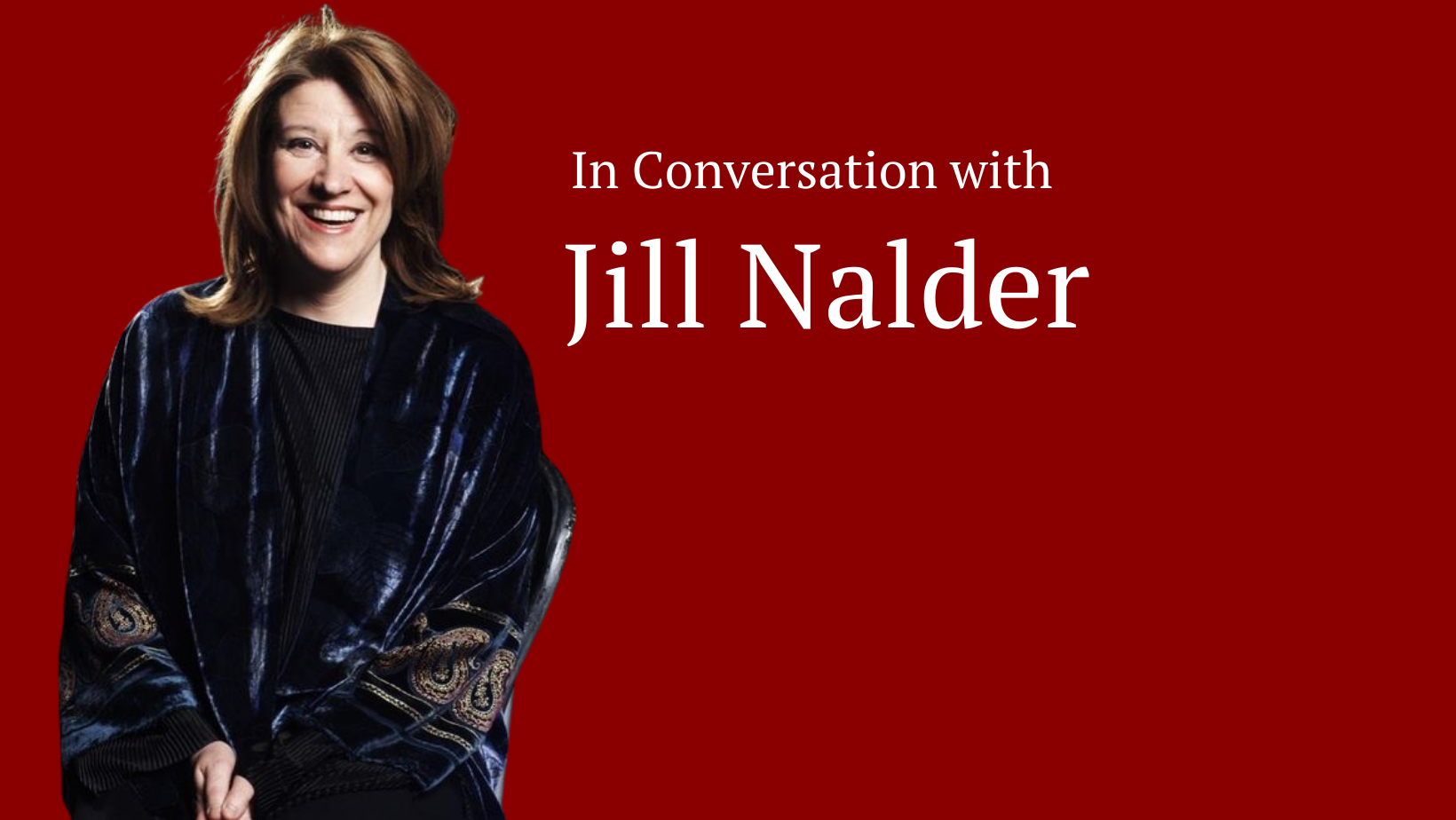 “It’s a bit of a whirlwind at the moment…” Jill tells me, “the response is a bit unbelievable.” She has just finished watching the third episode of Russell T Davies’ new series, It’s a Sin, which centres around the lives of five friends living in London during the peak of the AIDS crisis. It’s a Sin tells the story of their loves and losses as they navigate life under the threat of this deadly illness. Jill is at its very centre, her experience of the time providing part of the inspiration for the story.

The show itself has been an instant-hit, its characters striking a chord with Davies’ audience: there’s the rambunctious ringleader Ritchie (Olly Alexander), self-assured Roscoe (Omari Douglas), sweet-tempered Colin (Callum Scott Howells) and oh-so-charming Ash (Nathaniel Curtis). The gang is led by their matriarch, Jill (Lydia West), the heart and soul of the show, whose character is loosely based on Jill herself and her tireless work in the fight against AIDS.

The character was created after a series of intimate discussions with Davies, a long-term friend of Jill. Using her experience of the time, and of course his own, Davies constructed this semi-fictionalised representation of the London queer scene in the 1980s in all its magnificent technicolour.

Jill vividly recalls the time. When she wasn’t honing her craft at Mountview, she was spending her time with a glorious group of friends: going out, getting drunk and ending up at someone’s place to continue the fun. More often than not, these after-parties took place at the iconic Pink Palace, as portrayed in It’s a Sin, the actual apartment Jill rented with her friends at the time.

“We had such fun there!”, she tells me. Though she notes that the actual Pink Palace was “way more glamorous” than its televised portrayal, recalling a large mock-Tudor building complete with pink velvet curtains, pink sofas and chandeliers. “It was not very student-y in the conventional sense,” she tells me.

Parties at the Pink Palace were a semi-frequent occasion. Jill describes cabarets where guests would perform their “party piece” for an adoring audience. The parties were on the wilder side. “You don’t think of it as hedonistic,” she tells me, “you just think of it as life! Now, when I look back, it seems hedonistic because it’s so care-free. It was a sense of freedom. That great freedom you have when you’re young.” Though she’s quick to point out that, unlike the show, there was “certainly not sex in every room 24/7.”

Over time, the Pink Palace became a legend, taking on a mythic status within the community. But, for Jill, it’s the nights spent with friends she remembers more than anything. “You become very close,” she tells me, “and then you become lifelong friends. If you’re lucky. I lost a lot of those people…so what would have been lifelong friends was not to be.”

Jill’s first encounter with AIDS was the death of a friend from college. “He’d gone home because he was ill…and then suddenly we heard he had died. And nobody knew what had happened to him. He was 26,” she tells me. There had been rumours that he had died of AIDS, but this wasn’t something that was ever explicitly said.

We get a sense of this in the show, murmurs of an unknown illness disproportionately targeting homosexuals. In the first episode, we see Richie at university, eyeing up the boys he fancies. Alexander brilliantly captures the bright-eyed wonder of closeted desire. It’s fun and flirty and inconsequential. Though, in the background, two women discuss rumours of a deadly disease. “41 men with this cancer thing and they all died at the same time in New York,” one says, “and they were all gay.”

There was little information out there at the time, Jill tells me, partly because AIDS was a new disease and because it was predominantly targeting “a stigmatised community.”

The LGBT community itself didn’t pay much attention to the rumours at first. Davies captures this denial perfectly. There’s a monologue in the second episode where Richie dismisses Jill’s concerns. He playfully pokes fun at the theories: “they say it arrived from outer space on a comet”, “they say God created it to strike us down”, “they say Freddie Laker spread it when he introduced cheap flights”.

“Don’t you see what all of these things have got in common?” he asks, before gleefully proclaiming: “they’re not true!”

You want to believe him. You want to lose yourself in the dizzying lights of the Pink Palace to the soundtrack of Patrick Cowley’s Do You Wanna’ Funk?, to be blinded by Davies’ intoxicating portrayal of the London queer since, to ignore the reality of a deadly disease striking down young men in their prime.

“Nobody listens, do they?”, Jill says, “I’m a cautious person, I was warning my friends, telling them what I’d heard, trying to make them take it more seriously. Perhaps I was being a bit idealistic. People tried to brush it off. They were in denial. They were scared themselves. But it creeps up on you.”

“And then there were those terrible commercials…” she recalls, “with the tombstone smashing…”

The commercials she refers to were public information adverts issued by the government, warning people not to “die of ignorance.” Voiced by John Hurt, complete with apocalyptic visuals and a science-fiction score, they were chilling clips intended to alert the general public to the dangers of AIDS. Jill appreciates the effort, but sees the flaws in the campaign:

“I don’t think it was a particularly good commercial. It stigmatised people.”

The advert itself announces, in an ominous voice, that “so far [the disease has] been confined to small groups, but it’s spreading…”

“It makes those ‘small groups’ totally stigmatised,” Jill tells me, “people were horrible to Chinese people when they first found out about COVID. I think you can imagine what people were like to gay men if they thought they were spreading AIDS.”

They also feared the news might reach their families: “they felt ashamed…they didn’t want to let their families down. There’s a desire to protect your parents because you think they might be stigmatised too. It doesn’t stop with the person; some people would be horrible to the family too if they heard rumours. It becomes a stigma for the entire family.”

Jill describes visits to hospital wards that were “full of young gay men”, all of whom “carried a great shame and sadness.” Some had visitors, like Jill, though many were too ashamed to tell friends and family. She took on a maternal role, caring for friends suffering from the disease who felt like they couldn’t tell their family. It was a physically and emotionally demanding task, but she never considered walking away from those in need: “Once you’re involved in somebody’s care, particularly when you know their life is not going to be long, you can’t let them down. You can’t turn your back on them.”

Jill still remembers how it felt to be told by friends that they had been diagnosed with the illness. “You’re just a listening ear at that point,” she tells me, “It’s emotional, but you’ve got to try and not get emotional. You have to be positive about it, though you still feel that sadness and that trauma…they’re telling you something that you know is going to kill them. It’s hard.”

As more of her friends were diagnosed, Jill became a fierce campaigner, throwing herself into activism to help those in need. She set up the charity, West End Cares with a group of seven fellow West End performers. The charity is still going, nowadays under the name TheatreMAD Make A Difference. Since its inception, they have raised upwards of £10 million in the fight against AIDS. Their most recent event was a performance of Rutter’s Requiem on World AIDS Day.

As part of her work with West End Cares, Jill funded vital research, gave money to those who were unable to work due to the disease and helped raise awareness and solidarity for sufferers. She was relentless, organising late-night cabarets, competitions, raffles, carol concerts, etc. “We did loads,” she says, “you have no idea.”

But why did she care so much? Why did she dedicate her life to battling a disease that predominantly affected gay men?

“That was my world,” she tells me. “That was the world I moved in, and they were my friends. And if you love somebody, you want to help.”

In popular culture, straight women within the gay community are often cast as the counterfoils to their WASPish queens. Think Grace Adler in Will & Grace or Amanda Tanen in Ugly Betty. These relationships are characterised by bitchy put-downs and unrequited attraction. Jill’s friendships, as portrayed in It’s a Sin, were a much richer and more meaningful interaction, the epitome of straight allyship. And shared joy.

There’s a striking line in the final episode of the series, where Richie reminisces about his time spent in the beds of all the boys he slept with, reflecting on their collective legacy. “They were all great,” he says, “that’s what people will forget. That it was so much fun.” Is Jill worried that people will forget?

“I don’t think they will now,” she tells me, “I think Russell has made sure of that. People will have to think twice if they thought it was all doom and gloom. That’s his legacy.”

And hers too, I point out.

“It’s incredible, quite incredible to think that you have any legacy in this world. But Russell’s legacy…oh my god it’s enormous. When you’re a part of that, it takes you by surprise, I tell you. And those boys…the foundations they laid. It’s so amazing to be part of that, truly.”

Jill lost four very close friends to AIDS, but is reluctant to tell me much about them.

“I can’t say any names because of their families,” she says, “I’d like to shout their names from the rooftops, of course I would. They were incredibly brave human beings. And if it was any other illness than AIDS I would. But it wouldn’t be right to their families. It’s not for me to decide that.”

“But they were fabulous,” she says with a grin, “they were all just…fabulous.” 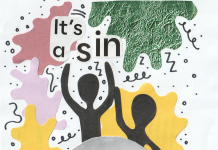 It’s a Sin: a sublime and sorrowful social history 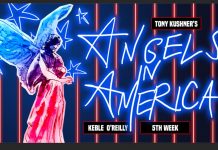 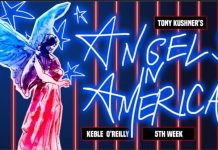 Queerness, Revulsion and Magic – the Dissonant Worlds of Angels in America