CherwellIndependent since 1920.
Life Profile In Conversation with Amelia Dimoldenberg 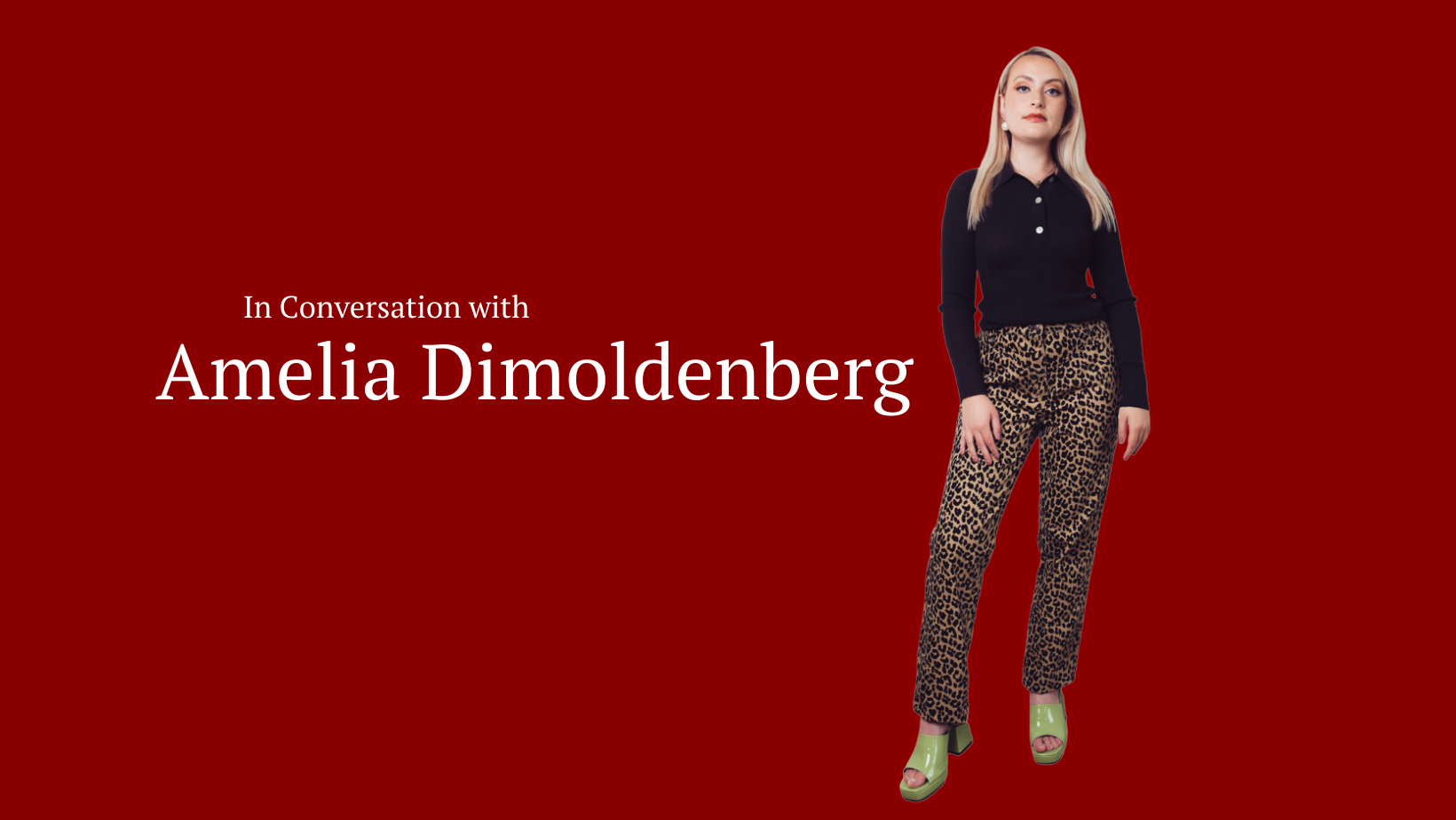 Starting as an ambitious crossover between chicken nuggets and grime, Amelia Dimoldenberg’s YouTube show, Chicken Shop Date, launched her career as an interviewer and presenter at the top of her game. Having now amassed 100 million views and close to one million subscribers, she quite literally ‘dates’ pop culture figures from Ed Sheeran to Maya Jama in chicken shops across the U.K. A hilariously cringey five-minute interview ensues, brought to life by an exquisitely tuned combination of awkward silences, sarcastic wit and unaffected questioning. Who else would ask Jack Harlow if he was able to read, or tell Aitch he “look[s] a bit like a prawn”?

Logging into the zoom call, I half-expect to be met by this same stone-faced, self-professed serial dater I had so enjoyed watching over the years. Instead, I am greeted by almost the antithesis: an incredibly personable, smiling Dimoldenberg sitting in her brightly-lit kitchen.

“I feel like it’s obviously an exaggerated version of myself,” Dimoldenberg explains. “I’m just extending aspects of my personality that, if I pushed them further, would be funny and would get a reaction from the person I’m interviewing, in the best kind of way, that would make for a really entertaining video.”

Dimoldenberg initially created Chicken Shop Date as a written column in a youth club magazine, and was first introduced to grime and rap through fellow members. She then decided to interview artists in order to learn more about their music. Having seen journalists pose the same unoriginal questions to celebrities time after time, Dimoldenberg was keen to do something different: “I wanted to do an interview in a way that you don’t normally do an interview, so I thought I’d do it as a date. I also really wanted to go on a date as well. Then someone said you should go on a date somewhere where you would never normally go to make it fun and that’s how the chicken shop happened. Luckily there’s quite a few in London to go to.”

Unlike traditional media interviews, Dimoldenberg’s show is as much about the interviewer as the interviewee. She attributes her success to people wanting to see how typically composed celebrities manage the gloriously uncomfortable atmosphere that she so effortlessly creates through her ‘chicken girl’ persona. ‘Chicken girl’, of course, being one of the many names she has turned around to in the streets of London, alongside the simple, but effective, ‘CHICKEENN’(spellings may vary).

With her tremendous success, Dimoldenberg certainly seems to be making ‘awkward’ fashionable, something she tells me is a bit of a conscious mission: “I feel like awkward is a negative term,” she pauses. “If you’re being called awkward it’s not something you’d shout about. But I’m trying to turn it into a positive (…)So many interactions are awkward. Especially dates and just meeting people generally. I think it might be quite nice for people to see someone being awkward and think ‘oh god, I can relate’, or if you can’t relate, then it makes you feel better about yourself,” she trails off in laughter.

As we talk about the filming process, Dimoldenberg explains that a lot of the humour is derived from how the footage is edited, and she’s a wholehearted proponent of ‘less is more’.

“We film for about forty minutes. Minimal is used. That’s the beauty of it really. I watch so much content where I’m like ‘this could be half the length. So much of this stuff is like, not interesting’. That comes from a place of me watching so many things and me being like, ‘I don’t want it to be like that’. If you’re not laughing, what’s the point in even having this clip in it.”

Whilst Dimoldenberg’s content is well-understood and loved in the context of British humour, I wonder how she deals with situations where the person she is interviewing might not quite ‘get it’.

“The ideal with any guest is you want someone that is coming back with something interesting to say.” She pauses briefly, and changes her mind. “No, funny first. In my head I’m saying: ‘say something funny, say something funny, please can this be funny’. And if it’s not funny then at least it should be interesting. And if it’s neither of those then you’re a bit like ‘oh, goodness’. If someone’s sitting opposite me and giving me back one word answers it is tough, but to my advantage with Chicken Shop Date, it thrives off the awkwardness. It’s meant to be a terrible interview and terrible date. It’s spinning it all on its head, like the inverse of what those things should be and that’s where the comedy comes from. So I’m actually pretty lucky that if someone maybe just gives me one word answers I can make that the punch line, make that the ‘thing’ of the interview and that’s funny in its own way.”

So how does Dimoldenberg select the ‘ideal guest’?

“I am very picky. Like everyone is with who they date. It goes through criteria. Are they exciting enough? Is there a buzz around them? Do we think they’re going to be big if they’re not already? Watching previous interviews, do they have charisma? Are they funny? All these different things.”

The more we talk about her career, the more I get a sense that Dimoldenberg is certainly not to be seen as a one-hit wonder. From starring in her own cooking show to presenting a documentary, ‘Meet the Markles’ for Channel 4, she seems keen to diversify her portfolio. Most recently, Dimoldenberg filmed a six-episode investigative series for Dave, called ‘Who Cares?’, posing questions to the British public about topics including the housing crisis, billionaires and fast fashion. How did she manage the transition from the more light-hearted nature of Chicken Shop Date to more serious conversations while maintaining her comedic personality?

“I’m not propositioning them for a date, and I’m not flirting with them on the street. I’d probably get arrested!” Dimoldenberg laughs. “I’m trying to use humour to get something interesting out of the conversation. That, I guess, is the kind of thread between all my work – my tone of voice, the deadpan humour,” she says wisely.

While Dimoldenberg is most well-known for these skills as an interviewer, I wonder whether she has considered making content on her own. Perhaps the recent change in name of her YouTube channel from ‘Chicken Shop Date’ to ‘Amelia Dimoldenberg’ speaks to a desire to establish herself as a comedian in her own right?

“Of course, most of the stuff that I do is opposite someone. I’m interviewing someone and I actually love that. That’s my favourite type of thing to do and that’s what I think I will be doing for a long, long time. As you said, it needs that dynamic and something to riff off. But at the same time, to build my audience and to build my name, I need to be doing stuff on my own. Working with talent is amazing and you get such brilliant content from it, but it also can be such a hassle (…) Maybe it would be easier if I was just vlogging in my bedroom and all I needed was me and my camera and my handbag with all the stuff I was going to show you that’s in it. But I don’t think that’s what I’m interested in making. I’m interested in making iconic pop culture moments, which I feel like I’m kind of doing. I think you need to have celebrities involved. But I think it is important for me to make sure my name stands out on its own.” She pauses deliberately.

“Still, so many people don’t know my name in terms of people that watch Chicken Shop Date. So many people just call me ‘the girl from chicken shop date’ or like on the street they’ll be like ‘CHICKEEN’ or ‘CHICKEN GIRL’ and I will just turn around because I turn around to that now. But more and more I find people are like ‘Amelia!’ and that’s when I know I’m doing something right – when people start to remember my actual name.”

As our conversation draws to a close, she tells me about what’s in store for the rest of the year. In addition to monthly uploads of new Chicken Shop Date episodes, she hopes to continue filming with members of the England football team:

With plans to write her own screenplay “in the long term”, she’s also taking some time off. We both take a moment to lament the fact that neither of us own a picturesque lake house to which we might go on a writing retreat.

Just before we end the call, I ask the question that I’d been waiting to ask since we started. When are we going to see Drake on Chicken Shop Date? She laughs. It’s no secret that Drake has been her dream date since the show started.

“Drake did slide into my dm’s just before the pandemic hit. That was just an insane thing that happened that I just can’t get over and it’s just incredible and means so much to me that he even watched the show. Fingers and toes crossed. I’m thinking in my head that when he comes back to do another tour, which I’m sure he will, that that’s the perfect time. He’ll be in London. I’ll slide in again: ‘You owe me a favour, Drake. Hello. I’m available.’” 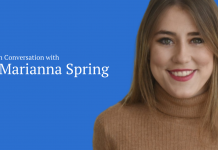 From Cherwell to the BBC: Marianna Spring in Conversation