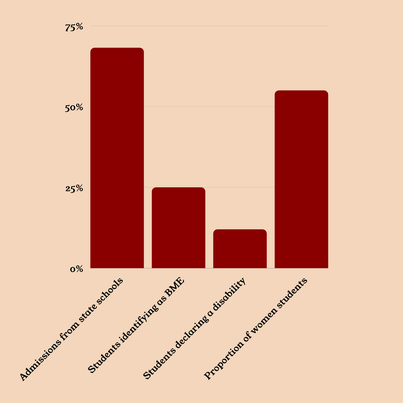 The University of Oxford published its fifth annual admissions report in May 2022, providing a summary of undergraduate admissions data ranging from overall numbers and domicile to nationality, disadvantage, school type, gender, ethnicity and disability.

The University admitted 3,298 undergraduates in 2021, returning to a smaller cohort after exceptional arrangements for awarding qualifications in response to the pandemic led to a much larger class (3,695 students) being admitted in 2020. These 3,298 admitted students were whittled down from a pool of 24,338 total applications in 2021, of which 3,555 received offers from the University for an offer rate of 14.6%.

In her foreword, Vice-Chancellor Professor Louise Richardson attributed these changes in part to the expansion of Oxford’s flagship UNIQ access programme for state school students, as well as the bridging program Opportunity Oxford. In 2022, the University will also launch the Astrophoria Foundation Year, for “those with high potential whose education has been severely disrupted,” according to the report.

However, Richardson also noted concern about the steep decline in students admitted from the European Union (EU), even though the University expected a decline due to the changing fee regime brought about by Brexit. (Oliver Hall reports in more detail below.)

Using the ACORN and POLAR demographic systems to assess UK population by level of socio-economic advantage, the report found that History & Politics and Law were the courses to admit the highest proportion of students from the two most disadvantaged areas (26.8% and 25.0% respectively). Materials Science and Theology & Religion were the two courses with the lowest proportion of admits from the most disadvantaged areas (9.1% and 10.0% respectively). These data were aggregated from 2019-2021.

The same measure revealed that Mansfield College (23.2%) and Worcester College (22.0%) had the highest proportions of UK students admitted from the two most socio-economically disadvantaged areas, and Lincoln College (7.2%) and Merton College (11.1%) had the lowest among 29 of the undergraduate-admitting colleges at Oxford that were included in the assessment.

Likewise, individual colleges receive differing proportions of applicants from state versus independent schools. The proportion of UK state school students admitted was highest at Mansfield College (94.8%) and lowest at St. Peter’s College (55.6%) from 2019-2021.

The admissions report can be read in full here.