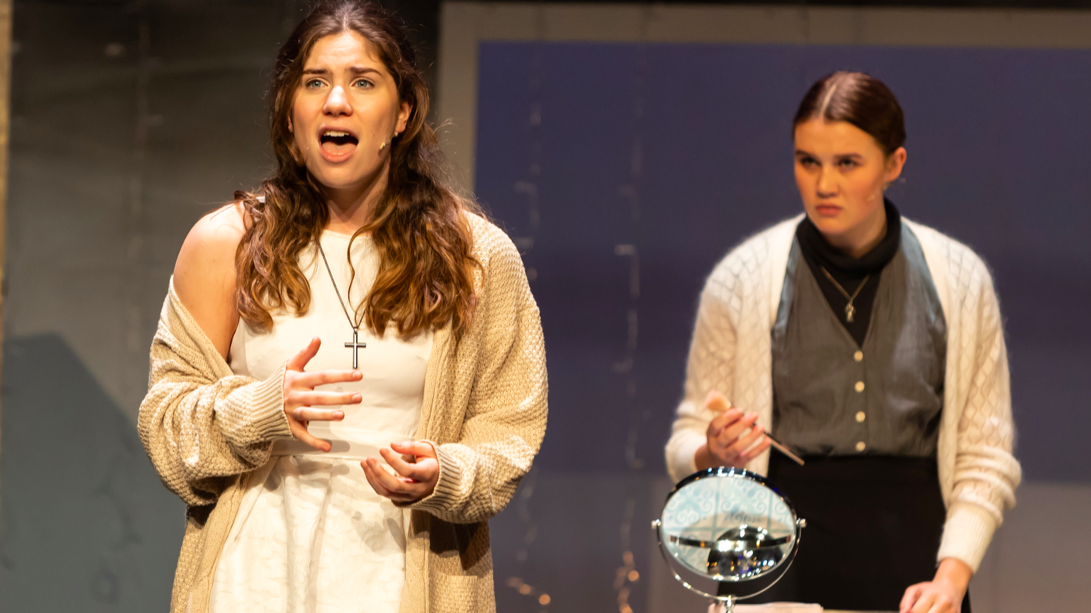 Founding Fellas Productions have made an interesting choice in staging Carrie: The Musical at the Oxford Playhouse, which I watched in a dress rehearsal earlier this week. With its catastrophic production history (a book of Broadway failures is named after it), the musical is famously one of the biggest flops in theatre history. But given renewed interest in the material (from Riverdale specials to a dedicated podcast series) their choice is unsurprising, especially with the current popularity of dark, teen-angst products like Heathers: The Musical. Based on the Stephen King novel, and with an iconic Brian de Palma film adaptation, the tale of bullied, isolated teen Carrie White is well-known. Considering that Carrie discovers she has telekinetic abilities after her first period, there is also an opportunity to reshape it with feminist interest. If only the writers of the musical were drawn to explore that angle back in 1988.

The musical, with a score by Fame! songwriters Dean Pitchford and Michael Gore, begins with a typical chorus of angsty, anxiety driven teens, though with a more concrete sense of concern than in the similar openings found in the musical adaptations of Fame! and Heathers. It is fortunate that Vanessa Silva’s often violent, searching choreography saves the opening number from cliché. As Carrie, Harriet Nokes delivers the rock score – with its leaping pitch and pulsating, brightly cluttered rhythms – with ease. It’s a pleasure to hear as her voice rises in power and contracts back to the soft interiority with which it began. The quiet despair she brings to Carrie’s loneliness develops into an equally quiet joyfulness in the second act. It’s a subtle performance and very well done. Nokes’ scenes with Eleanor Dunlop, playing Carrie’s devoutly religious and controlling mother Margaret White, are the highlight of the production. Dunlop, who was a standout in Persephone last year, shines in this role. Her vocal depth is powerful, her voice almost exploding in on itself whilst holding an eerily cold exterior, then falling into tense despair in her second act ballad.

Carrie: The Musical has never fully recovered from the divided creative team back in 1988, and there is a resulting unevenness to the material, which is no fault of the creative team of this production. The high school nostalgia of songs like ‘The World According to Chris’ and the sentimentality of ‘Unsuspecting Hearts’, though perfectly enjoyable, just never match the dark, belting intensity of the mother-daughter duets. In their scenes, Dunlop and Nokes are breathtaking together, so much so that I wished Dunlop could storm into the high school as Margaret White and knock the script’s underwritten characters into shape.

Grace de Souza clearly enjoys every second onstage as Chris, the high school ‘mean girl’, with a sickly smile throughout, whilst Luke Nixon, as the kinder Tommy, gives a sensitivity that contrasts the swagger of Chris’ boyfriend Billy, played by Oxford musical theatre mainstay Peter Todd. To these supporting characters the musical never provides much exploration, but the cast, particularly Nixon, manage to bring an admirable depth. Alongside this, Beth Ranasinghe, as Carrie’s sympathetic PE teacher Ms Gardner, aptly moves from a harsh authority over her students to the softer sympathy of student-teacher friendship.

The role of kind-hearted Sue, who attempts to reach out to Carrie to the disgust of her peers, is split between two actors, Grace Olusola and Gianna Foster, across the run. They take very different interpretations. Foster’s voice more typically suits the material, with her ecstatic malice gradually replaced by wide-eyed idealism. Olusola is very different; her deeper voice brings a restrained softness that contrasts Sue’s classmates. Whilst Foster’s eyes sparkle, Olusola’s build towards interior despair. It is an interesting choice to split the character this way, given that the two performers have a very different dynamic with Nixon, who plays Sue’s boyfriend. At times, the supporting cast struggled to fully meet the demands of a challenging rock score, though when the band – under the musical direction of Beth Fitz-Patrick – surges into full rock-ballad mode, the cast are aptly supported. I’d particularly love Eleanor Dunlop and the cello player to release an album!

The cast is completed by a strong and confident ensemble. Ellie Tutt and Gillian Konko are noticeable standouts, with expressive and interesting performances. Considering that the true test of any musical is in the quality of the ensemble, there is stable grounding to the production. Tutt and Konko bring a firecracker energy to the choreography; Tutt’s delivery of the hip-thrusting, thigh-bending opening number is particularly memorable. In the second half, Emma Starbuck and Sav Sood bring a necessary humour to the prom sequence.

A test of any interpretation of Carrie is in its staging of Carrie’s telekinetic abilities, particularly in the infamous climax. On the whole, the stage effects successfully conveyed a levitating statuette and self-propelling books. However, I felt these key moments were underplayed and struggled to build a moody, horror-driven atmosphere. More importantly, the production’s finale lacked a true climax. I hope that by opening night de Souza and Todd have learned to pour their bucket-load with more accuracy (or perhaps just get them a bigger bucket), as there was no recreation of the classic climax pose so iconic in Brian de Palma’s film version. Whilst Sweeney Todd managed last term to use lighting alone to create an eerie, genuinely unsettling close, the finale of Carrie, though similarly impressionistic and drenched in red, struggles to salvage a badly structured script. However, the haunting, almost-symbolic movement from the ensemble does have great impact. It would be overly harsh to criticise a student production for the absence of expensive stage effects, and the production’s skilful use of remote-control mechanics is itself worthy of praise.

What eclipses any criticism is that Founding Fellas Productions have managed to prove that Carrie: The Musical is worthy of greater attention. What I have previously considered flawed material, lacking in musical depth and experimentation, I found to be compelling viewing with many standout moments. This is due, in no small part, to the talents of the cast and crew, and it is certainly worth a trip to the Playhouse to experience this unique musical. This team has demonstrated the value of a musical once deemed to be unperformable, and that is worthy of praise!

Carrie continues at the Oxford Playhouse until Saturday 21st May.