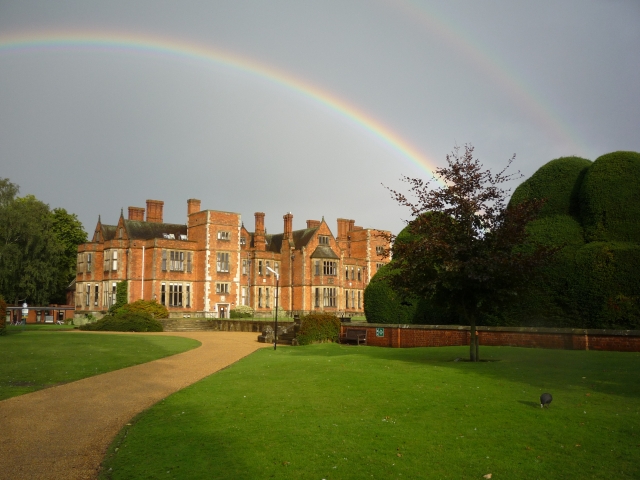 “It is a truth universally acknowledged, that a single man in possession of a good fortune, must be in want of a wife.” The first line from the most famous of straight stories marks the start of Fire Island, the latest Pride Month release on Disney+. The film, a loose adaptation of Jane Austen’s Pride and Prejudice, unapologetically reveals the law of desire that seems to rule throughout space and time: that ‘possession’ puts you in a better position to ‘want’.

Andrew Ahn’s film confirms that queer relationships stand no chance of escaping Jane Austen’s seemingly universal truth. As the group of friends led by two gay Asian men embark on their annual trip to Fire Island, with great plans for parties, orgies, and vacation flings, they discover that paradise has many gates. They are scorned by white gay men who are financially more successful, who find their behaviour – from things as small as loud yelling and the flailing of arms, to the ‘stealing’ of cheese and wine at private parties – eccentric at best and despicable at worst. Rather than a bacchanal where all participants are equal, Fire Island is divided into social circles with clear boundaries, which repeatedly attempt to bar our protagonists even from parties they are invited to.

These social strata drawn up by the difference in financial circumstances are unmissable on Fire Island as a setting. The island, just a short boat ride away from New York City, is speckled with three-storey mansions, which dwarf the small vacation house that the protagonists are about to lose – a house that supposedly cost all of their lesbian friend’s lawsuit windfall. The mansions belong to lawyers, doctors and the like, middle to upper class white men who refer to Noah and Howie – the Jane and Lizzie of the story – as ‘the Asian guys’. And just like the Bennet girls facing the Bingley siblings at Netherfield, the group of protagonists, who from very early on are introduced as never being able to afford to buy properties, seem completely out of place on an island supposedly reserved for the queer community that they also belong to.

Surprising as it is, the well-to-do queer vacationers on Fire Island as portrayed in the film can easily find their parallels in our reality. We have seen Ellen DeGeneres call up celebrity friends in her massive living room during the pandemic on TV, read about Anderson Cooper’s decision not to pass on his $200 million net worth as his children’s inheritance, and followed the political career of Pete Buttigieg, a Harvard and Oxford graduate. Although LGBTQ+ equality in the world still has far to go, more and more queer people have managed to secure their places among the rich and successful. Their achievement is a sign of progress in itself, but at the same time it is also an indication that not all participants are financially and socially equal in the queer community’s shared fight for equality. Just as portrayed in Fire Island, where white gay men’s micro aggressions and latent racism towards their Asian peers are commonplace, ethnicity acts as an undeniable divisive factor among queer individuals. Although the claim of ‘white gay privilege’ in an article published on metro.co.uk may appear limited and premature, it is hard to ignore the size and depth of ethnic inequality reflected in the article’s statistics borrowed from FS Magazine, which sees ‘80% of Black men, 79% of Asian men and 75% of south Asian men hav[ing] faced racism on the gay scene’. Accompanying the racial discrimination in the LGBTQ+ community is the financial gap between privileged and underprivileged ethnic groups in the wider society where, according to a report by Office for National Statistics on Household wealth by ethnicity in Britain from April 2016 to March 2018, ‘households in the Black African (20%) and Arab (17%) ethnic groups have the lowest rates of home ownership, compared with 68% of White British and 74% of Indian households’.

Admittedly, the LGBTQ+ cinema and TV releases in recent years have grown better at addressing the discrepancy between the white and non-white queer experience. Moving away from the all-white cast prevalent in the earlier wave of queer TV productions such as Queer As Folk (both the original and the first American version) and Looking, the latest queer series have done relatively well on the diversity front: from HBO’s We Are Who We Are (2020), to Hulu’s Love, Victor, to the more recent shows such as Netflix’s First Kill (2022), non-white characters are finally given the central spotlight.

Yet alongside the progress in diversity on the screen, there seems to be an equally noticeable regression in class representation, especially in productions that feature queer young adults. It is hard not to notice the sheer number of middle and upper class families featured in First Kill’s Savannah neighbourhood, which seems to consist exclusively of mansions and Teslas. There is also the set for the fictional parties, which seem only to be able to take place in big suburban houses, from Stacey’s presidential campaign party in Disney+’s Crush (2022), to the mansion that contains actual murals on top of chandeliers in First Kill and, most ironically, the mansion fitted with a grand piano and a swimming pool that the protagonists in We Are Who We Are so desperately need for their rave and have to break into.

Compared to the latest batch of queer teenagers on TV, the protagonists of Fire Island, dressed in their thrifted outfits and crying over their non-waterproof iPhone 6S, seem like time travellers in comparison – from a time a mere decade ago, when queer characters still lived in shared apartments and worked non-standard jobs they didn’t know how to describe. It is time to realise that class representation in LGBTQ+ screen productions is as important a step towards equality as diversity and inclusion – that glamour should be affordable for all, and that love should not be bought.

How did Truss’ Cabinet become so anti-LGBTQ?

Party to privilege, and privileged to party: College balls and socioeconomic exclusion