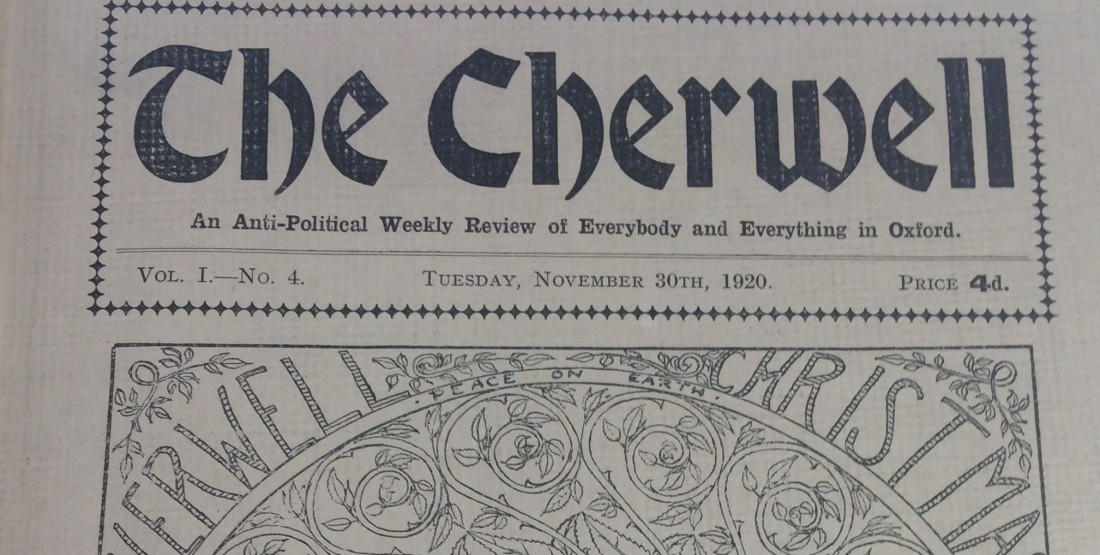 The Cherwell was founded as an undergraduate magazine by Richard Christian Cecil James Binney and George Adolphus Edinger in 1920. Binney and Edinger had both served in the First World War before coming to the University of Oxford in 1919 – Binney served with the Royal West Kent Regiment in France and Edinger with the Field Ambulance Convoy and later the American Red Cross in Italy. During their time at Oxford, both men studied at Balliol College and it is clear from early editions of the paper that they spoke regularly at the Oxford Union. The magazine was first conceived in the long vac of 1920, when the two men were heading to Austria to do relief work on behalf of Save the Children. On their way to Vienna, the packet boat from Dover to Ostend was running three hours late. As a result, Binney and Edinger talked about ‘the deplorable state of Oxford journalism’ to pass the time. The two noted that, at that point, Oxford had no undergraduate-owned weekly journal. ‘One of them said Oxford didn’t want one. The other said it would be worth trying.’

Of course this account of the paper’s founding is somewhat selective. The Isis had been recently relaunched in 1919 by Beverley Nichols, after a four year hiatus resulting from the war and no less than seven other undergraduate publications produced by political societies also existed. Both The Isis and the Cherwell were written by undergraduates and came out weekly – The Cherwell’s claim to be the sole undergraduate periodical only existed in its ownership. Whereas The Isis was owned by Holywell Press, which allowed students to produce it as long as it was profitable, the Cherwell was to be entirely financed, staffed, and owned by students. However, even this is not as neat as it sounds, with the magazine’s first editorial acknowledging the existence of a somewhat similar publication called the Cardinal’s Hat. Therefore, although the Cherwell was not entirely unprecedented, it is significant that it was conceived as something that should be run – both financially and editorially – by students from the very beginning.

Binney and Edinger would both run the magazine until they graduated in 1923. Binney would go on to become a barrister and died in 1966. Meanwhile, Edinger would also become a barrister, but he clearly could not resist returning to journalism. In 1928, he got a job at the Sunday Express and was a war correspondent during the Second World War. After that experience, he moved to Southeast Asia, where he worked for the Strait Times of Singapore and as a freelancer. He would die in 1984. Whereas Binney disappears from the pages of the Cherwell after leaving Oxford, Edinger continued to write occasional guest contributions for the magazine. In 1975, when the paper’s editor wrote to Edinger, he replied telling them:

You do not need to tell me all the Cherwell has accomplished and provided over the last 50 years. But you do need to tell the world.