Even at the dress rehearsal, it was clear that SLAM Theatre’s The Threepenny Opera is not to be missed. As the first production of Simon Stephens’s adaptation since the National’s in 2016, SLAM makes the most of this exciting opportunity with their exhilarating and hilariously vibrant revival.

When Polly Peachum elopes in the middle of the night with the notorious criminal Macheath (“Mack the Knife”), her parents instigate a dizzying manhunt for the East End crime lord. The King’s Coronation gets closer, and blackmail and bribery collide with moments of shock patriotism to reveal every aspect of this amoral criminal network.

As a familiar Victorian character, the master criminal led astray by his sexual voracity, Macheath is kept from feeling two-dimensional by Eoghan McNelis’s more haunting lines: “we can’t have ethics that we can’t afford”. The Peachum parents, played by Marcus Knight-Adams and Ella Tournes, form a thrilling double-act, engaging in ridiculous insult battles to see who can shout “you bastard” the loudest. Knight-Adams’s performance is at once hilarious and faintly disturbing, providing many of the play’s most memorable gags, and yet willing to break a girl’s fingers for information. The performance, then, offers plenty of laughs, but it is not afraid to dramatise the more crude sides of this tumbledown district. Macheath, though accused of dismembering two people (“while still alive!”, Polly reminds us), repeatedly avoids capture. He keeps plates spinning until the very end, relying on the help of his beret-wearing criminal gang.

If at times the play borders on the absurd, it is prevented from ever becoming too chaotic by tight direction and well-rehearsed timings. Indeed, the performance was skilfully balanced, combining crude scenes of poverty and prostitution with hilarious slapstick comedy. “I stabbed him in the bum”, Macheath reminds us, as spools of red wool spill out from the prison guard’s trousers. This heady combination of euphemism and destitution culminates in the final scene, which boasts a scaffold and noose, alongside party hats and a baby’s buggy.

The set, too, is simple but deeply effective. The ramshackle brick buildings, complete with shattered windows and broken shutters, establish the sordid tone of the play, evoking the terrible poverty that Macheath tells us to overlook: morality, we are reminded, is “not a simple matter”. Props come and go, such as a noose and prison bars, but the basic arrangement is kept the same and creates a space that doubles as prison and whore house.

Part of the charm of this dark musical, then, is its unexpectedness and impressive flexibility. But the power of this production also owes much to Matthew Jackson’s musical direction, which uses a seven-piece band to do full justice to the play’s musical history. The lighting also proves wonderfully jarring as ominous flashes of red light offset the largely monochrome costumes, reminding us of the brothel to which Macheath cannot help but return.

After the National Theatre’s 2016 debut, Michael Billington suggested that Stephens’s adaptation makes one or two odd choices in its handling of Brecht, transforming Mr Peachum from a threatening embodiment of bourgeois criminality into a lewd figure with a checkered waistcoat. But even if Stephens exaggerates the sexuality, implying that Macheath has compromising information on “our important friend in Windsor”, and alluding to a past liaison between Macheath and the chief police inspector Tiger Brown, his lyrics ensure this is never overplayed. The musical numbers offer a stark contrast with the play’s self-conscious theatricality, insisting that there is no place for morality amongst the “desperate folk” of London’s East End, that “a vice is not a vice when there is no food”.

The joy of this production is that it offers a vigorous new take on Brecht’s musical with sharply defined performances and a vibrant on-stage band. Though the play is prefaced with a warning that “there will be no moralising tonight”, SLAM’s revival of The Threepenny Opera speaks to social problems of abuse and poverty, offering a compelling performance that is both unsettling and wonderfully entertaining. 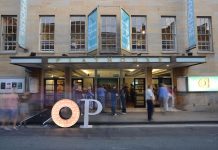 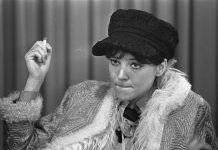 The fourth wall: Looking beyond the lens 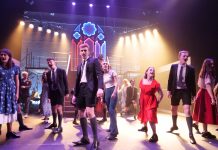 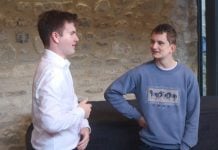 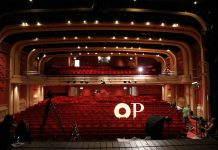 Fade to Black – a history of the theatrical blackout