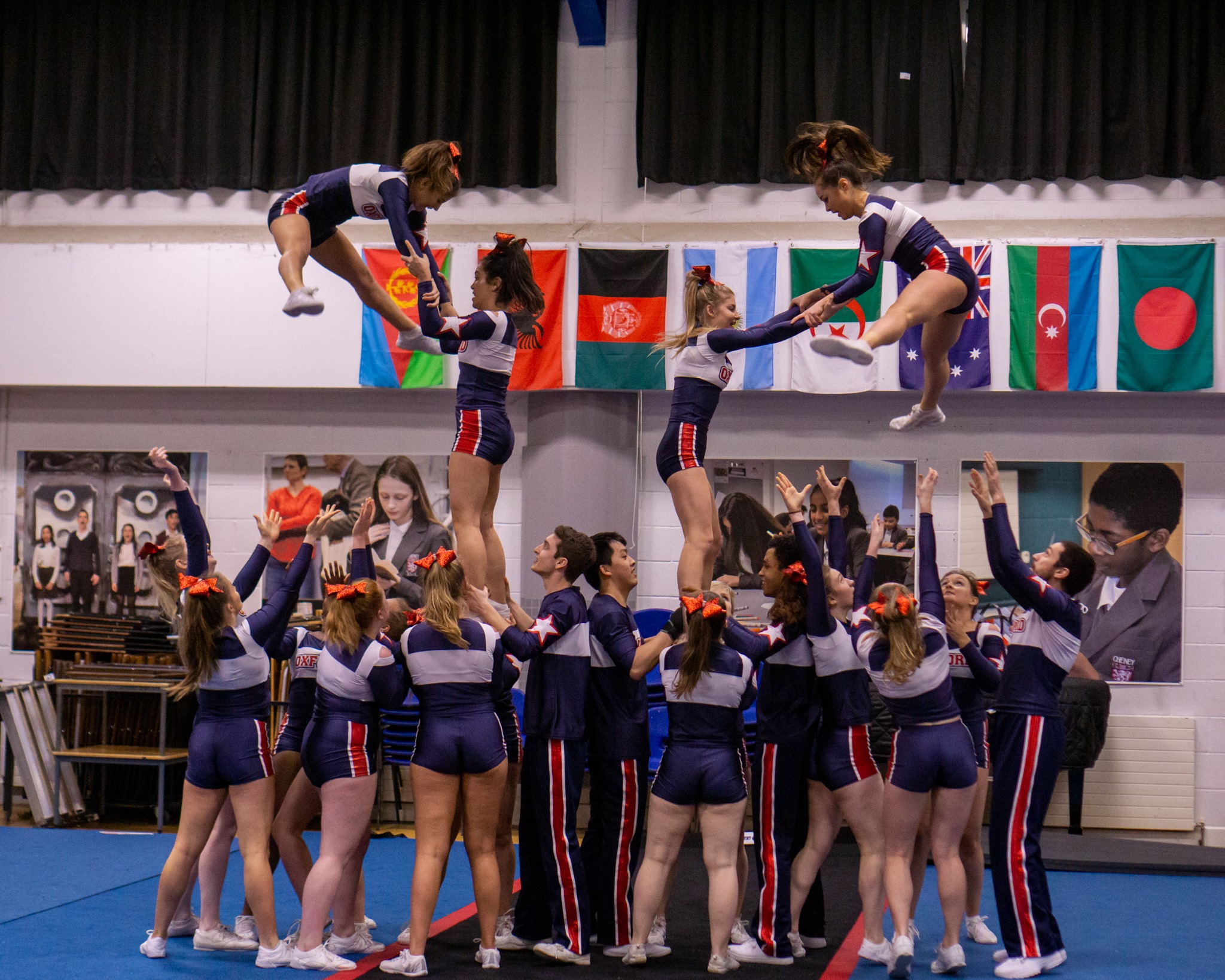 First of all: do you think people’s perception of cheerleading is skewed by the High School movie tradition, or more recently by the Netflix original documentary, Cheer? If so, in what ways? Are there any myths you’d like to bust?

Emily Lord: Coming from the US to the UK, I think that people’s perception of cheerleading is skewed by movie stereotypes and possibly Cheer (although Cheer is indeed an accurate portrayal of Collegiate cheerleading, at least at that level). Since high school cheerleading isn’t a thing here, people really have no exposure to it. You’re unlikely to have had a cheerleading team at your secondary school, so unless you happen to know someone who cheers outside of school, your only exposure is probably through these portrayals. The Bring it On franchise and Glee’s portrayal of cheerleaders definitely are not super accurate: why do they wear their uniforms to school every day? Where are the coaches?

Alexia Benchimol: I think the perception of a cheerleader as a dumb blonde on the sidelines is changing. The media and documentaries like Cheer are showing that cheerleading is a very challenging sport and that there’s no set prototype for what a cheerleader is like, or what a cheerleader looks like. On the team we have people with different body types, genders, sexual orientations, personalities, you name it.

Francesca Dyas: Whenever I told people I was doing cheerleading, their first question was always, ‘for what team?’ I was constantly explaining that cheer is the sport, and it’s competitive and very physically demanding.Cheer has helped to dispel the idea that cheerleaders are just on the sidelines and I think it is changing people’s perceptions of the sport for the better.

Molly Abella: It definitely isn’t always as glamourous as it seems, – a trick we are taught for when our hands get sweaty from holding flyers up is to wipe them on the bottoms of our feet so that we don’t drop anybody – a far cry from high kicks and pomlines!

Tell us about the training regime. How would you say cheerleading compares to other sports in Oxford?

Alanah Grant-St James: We train at least twice a week, often more when we’re coming up to competition season. The sessions are hard. You have to build up a lot of strength, stamina and endurance to survive a ‘full out’ (running through the whole routine as we would in a competition, i.e. giving it everything we’ve got). When we’re working on a specific section over and over again or doing full outs, our shoulders, legs and wrists will be aching, and we’ve just got to push through the pain to avoid making mistakes.

Molly Abella: There is a huge level to camaraderie with the training, which I would say is found in many Oxford sports but when other teams talk about everyone lifting each other up, we mean it literally! Within a stunt group, you get a huge degree of trust, as the flyer is certainly putting their physical safety in your hands – so they have to know that you are strong enough and coordinated enough to keep them in the air – or willing to take a foot to the face to protect them if something goes wrong!

Harriet Byrne: The night before competition we all had a cheer movie night and watched Bring it On to have some team bonding and nerve-busting. Just like the Navarro cheerleaders, we have a lot of our own traditions. Before performing, we each received a bead to tie on our cheer shoes, receiving one to mark every competition we partake in. Next we exchanged anonymous support cards, called snaps, in which we write a supportive message about one of our fellow teammates.

Emily Lord: Competition days (for us) start at 3 in the morning! Since there aren’t any competitions at Oxford, we have to travel by coach to the competition location. Unless you want to do your makeup on the road, you have to have all your makeup and hair ready before you board! I never thought I’d be trying to apply a blue smoky eye at 3AM just to sit on a coach for 3 hours.

We run through the stunt sequence, jumps, tumbling if we have it, and then will most likely mark through the routine as a whole again, maybe putting in stunts we think need extra work. It’s important to be fully warm and have practiced hitting the stunts, but also we don’t want to tire ourselves out before we go onto the competition mat.

Once our team name is called, we can step out onto the main mat in front of everyone! Those two and a half minutes are simultaneously the shortest and longest 150 seconds of your life. You’re thinking ‘oh my god I’m so tired, there’s no way I can finish this’ and at the same time thinking “oh my god it’s already the final 8-count?” Then comes the waiting. For us, at both our competitions we were one of the first teams to perform, so we had a long time to wait between competing and hearing the results.

Francesca Dyas: Typically we’re there for about 12 hours, however because we’re Oxford this means trying to find a quiet area in a packed and noisy stadium to try and do some work.

And what about scoring? How does it compare to say, artistic or rhythmic gymnastics?

Emily Lord: There are rigidly scored technical elements, but also subjective judges’ interpretations. Certain skills, such as jumps, stunts, pyramid elements, or tumbling are scored higher than others (basically, harder skills are worth more points), but you can get deductions for mistakes, such as not landing a tumbling pass, wobbling in a stunt, and of course falling. You also get a score for ‘overall impression’ – this is a subjective score that judges give, but they’re all pretty much looking for the same thing: high energy, big smiles, and good technique.

Alexia Benchimol: I used to do rhythmic gymnastics before university, and one of the differences in scoring is that cheer focuses more on performance. “Cheer faces”, the facial expressions we make while we perform, make routines look very fun. They also make for hilarious pictures.

Harriett Byrne: Deductions can also result from obvious mistakes and vulgarity – sticking your tongue out is a big no!

Harriet Byrne: As newly elected social secretary, the cheer social scene is one of the most exciting aspects of being an Oxford cheerleader. Once a week we attend a ‘crewdate’ – turning up to a local restaurant with another university team, and playing traditional Oxford drinking games, usually followed by a night out at Park End! We have also organised bar crawls, awards evenings, and invited each other to our respective college formals and bops; however, we also make sure to have a balance of non-drinking events in order to help build team cohesion. For me personally, the social aspect has been really important, and I would say that some of my closest and most trusted friends are cheerleaders. I haven’t had the easiest time in Oxford, having to resit ﬁrst year following a subject change, and whenever I had a problem, my fellow cheerleaders were always there to support me.

Molly Abella: We all get on like a house on fire, possibly because when you’ve sweated together, caught each other at every possible angle, and heard every variation of songs themed around fire the bond is pretty unbreakable. I think a lot of people have a bad image of the social side of sports clubs, but I would say we break a lot of stereotypes by having a lot of fun but always making everyone feel comfortable and included.

How do people get into cheerleading in Oxford? Have most people cheered before or is it something lots of people take up for the first time at university?

Alanah Grant-St James: In the UK, you’d be pretty lucky to find a cheerleading club in your local area. Most people on Oxford Sirens, like me, had never done cheerleading before university and got into it by seeing our stall at the Freshers’ Fair or by doing cheerleading cuppers in Trinity. This sport attracts people who are enthusiastic, want to be challenged physically, and want to join a team with an amazing, supportive atmosphere.

Harriett Byrne: I’d always wanted to do cheer but there aren’t many opportunities for cheer in the UK outside of university, so I joined with no prior experience. I initially wanted to be a base, as I wasn’t ﬂexible at all, but was surprised when I got put as a ﬂyer. At ﬁrst I was awful and had the least skill and ﬂexibility out of all the ﬂyers, but by attending training every week and stretching outside of training I slowly started to see myself improve.

Francesca Dyas: Our team was probably about 70% new people this year so if you want to do it just try out! The coaches are brilliant and teach everything from scratch, and it’s such a supportive environment that you can really feel confident when trying new things: I definitely did.

We’re still waiting for a decision from the Blues Committee as to whether the Sirens will be granted Blues status. It seems that there’s a lot of momentum behind the movement to gain recognition, with national coverage of the parallel campaigns in Oxford and Cambridge? How have these developments affected the lobbying campaign?

Charlie Smith, President of the Oxford Sirens: We’ve been in touch with the previous Blues student captains, who read our draft application and think it’s very strong. This is obviously encouraging! We’re now waiting to hear back from Sportsfed for a final decision, as we know it’s going to be discussed at the next meeting (in Michelmas).

All this aside, I’m confident that the attention cheer in general has been getting will lend credence to our claims that it’s a sport the university should be rewarding with Blues status and all the prestige that confers! Its recognition as an Olympic sport has certainly helped make cheer mainstream and any momentum we’ve built recently has only been attempting to build on that.

I should point out that my predecessor, Hannah Hayler, has actually been doing this fantastic work driving the Blues application thus far, so she deserves any and all credit for any eventual success we might have. I only took over a few months ago and have mostly been organising the various interviews we’ve been having to get the word out.

My personal hope is that the positive press will show the committee that the Sirens are creating positive sentiment for the university amongst the wider public, particularly helping to cultivate an image of Oxford as a forward-looking institution. After all, people are always surprised to hear that such an old university has a thriving (and nationally competitive!) cheerleading squad, of all things, and so I believe that people hearing about us paints the university as a whole in a good light. 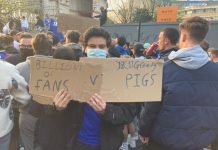