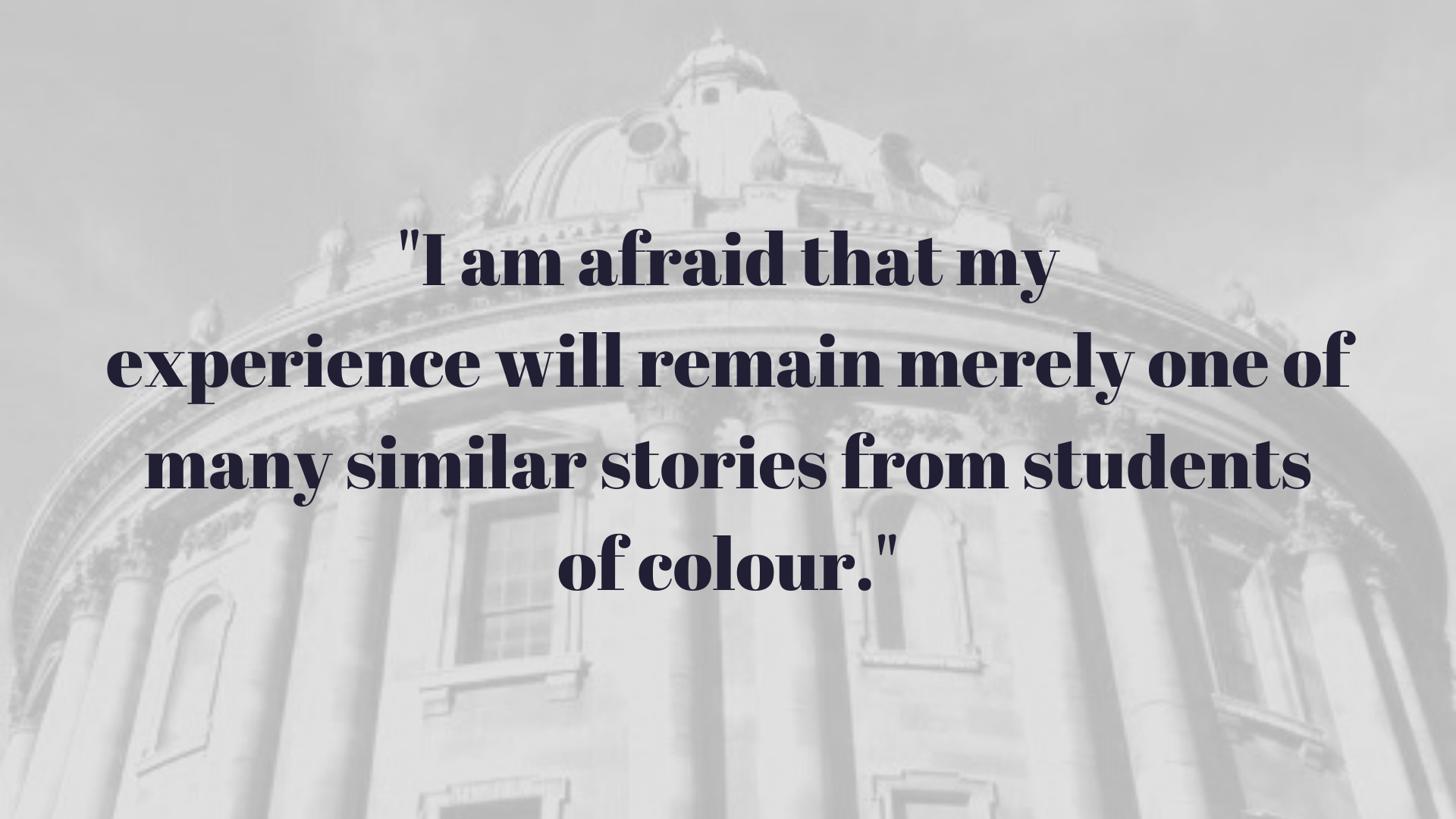 Upon descending at Oxford railway station with my dad at the start of Freshers’ Week and waiting almost fifteen minutes in the queue for a taxi, an old white driver finally pulled up. When it was our turn to get in, I had already opened the door, he said to me with the most reassuring voice and a smile, “sorry, love, I can’t take you in,” and drove off a few metres down the road without explanation. I nodded politely, not putting much thought into it but only five minutes later, a white family standing nearby, with the same amount of luggage, appeared to hail a taxi and the same driver came out of his car and welcomed them with open arms.

“I think the driver was being racist to us,” my dad said in a hushed voice. He too had studied in the UK for his undergraduate degree on a scholarship nearly 30 years ago, and I imagine he was a lot more familiar with the more subtle forms of racism that people of colour and foreigners would face. I begin to imagine how much has (or has not) changed within the past three decades. At the time I was too stunned to even process what happened, but it took a while to slowly come to terms that I got refused for a taxi merely because I was wearing a hijab. For this, I will remember my first day at Oxford until the day I die.

During the Spring Vac when I finally returned home, I was excited to show my mum the official college photo from matriculation, with everyone all lined up and dressed in sub fusc. Her immediate reaction was not something I expected, although I had secretly thought of the same thing when I first saw the photo. “Wow, you can very easily count the number of POC in here,” she said, a mixture of worry and shock on her face. I did not know how to respond. Granted, a white parent would nevertheless be unlikely to realise this when looking at a matriculation photo – and that, in itself, is racial privilege.

While I have never personally had insults hurled at me or anything aggressive of the like, the racism I experience on a constant basis appears in much more subtle forms. Microaggressions, like more overt expressions of discrimination, can have significant long-lasting psychological effects, and sometimes take us longer to realise because we often doubt the validity of our experiences. To an extent, we even make excuses for the subtle racism we continue to face, thinking that people are allowed to get away with it merely because they don’t know any better.

Apart from getting stared at suspiciously at another event (probably because I was wearing a hijab), and having people steal curious glances at me whenever the word ‘Islam’ is mentioned in public, I am also frequently told by well-meaning people that “your English is so good!” This has happened more times than I can remember. While I understand that their statement comes from good intentions, it nevertheless reflects an unacknowledged ignorance and perhaps even a subconscious belief in the ‘backwardness of the other’. I do not expect people to know that nearly all the schools in my country had, at one point, ran a bilingual syllabus, and that we were all taught English from a very young age. But at the very least, I did think that people would no longer hold on to stereotypical fascinations of a foreigner being able to converse fluently in one of the most widely spoken languages in the world.

Both my grandfathers went to British-run schools in colonial Malay villages, despite not coming from well-off backgrounds, because it was just the norm of their time, and they still speak fluent English today. Having to overhear arguments in defence of Empire in casual, non-academic conversation, while knowing that my ancestors were tormented by the British administration, and that my country still suffers from the socioeconomic and racial repercussions of colonialism today,  also remains an unhealed wound – but I shall leave this discussion for another day.

Dear reader, if my English was not “good”, I would not have even thought of applying to Oxford for a History degree. (Have you even seen what the admissions tests look like?). Yet, on a similar note, there have also been occasions when I asked people to repeat what they said because I couldn’t hear what they were saying, not because I didn’t understand the words they were using, but instead got brushed off and told, “sorry, I forgot English isn’t your first language,” before they hastily changed the topic of conversation. Again, perhaps genuinely well-meaning, but terribly executed, because it comes off as hugely patronising.

Other occasions also include my bank card never arriving to my pigeonhole, and having to call them multiple times for weeks on end, when apparently halfway into Michaelmas I discovered that they had already sent multiple cards which got delivered under the miscellaneous, unidentified surname inbox at the porters’ lodge, because the banks had gotten my surname wrong the whole time. While I had filled in the forms with my name and surname being exactly like the official one on my passport, most of my mail had been delivered to “Dania Aryf” instead, and because of this, I have now made the habit of checking both my own pigeonhole and the miscellaneous inbox every time, in case I miss out on anything important. I like to believe that this had never been a systematic error on their part, but rather, banks refusing to account for the fact that there are multiple names which are different to Western convention.

Sometime over the Winter Vac, I stayed with a friend in London, and my family from Malaysia also came to visit, with most of our time spent outside of Oxford. However, on the day we decided to drop by, I thought of showing them around my college, but we were brutally dismissed by the porters. I showed them my Bod Card as proof that I was a student and insisted that I only wanted to take them around the main quad because my family had never been to my college before, being fully aware that we were not allowed to enter the student accommodation. But the porters still blatantly refused even five minutes of a tour, arguing that visitors were not allowed during the vac, and I can’t help but feel that this would not have happened to a white, British family.

After getting elected as the Ethnic Minorities Officer for my college JCR, there were moments when I did contemplate whether the roles of equalities officers were merely an add-on for the sake of performative political correctness. I feared of being the only POC on the committee, and did not want to be seen as a “token minority”. But other instances in Oxford also include the unsettling thought of things so ingrained into our student culture – such as crewdates – and while I have nothing against them, the idea of having them in a curry house nevertheless seems a lot like cultural appropriation to me. I would even go as far as arguing that it normalises and even encourages being rowdy in public as socially acceptable as long as it takes place in an “exotic restaurant.” I have also overheard casual conversations about a white and black actress being compared and hearing one of them joke that “it’s not my fault that she [white actress] has better skincare,” which was genuinely shocking. But alas, these are only a few out of many other microaggressions that I can think of from the top of my head.

While the university likes to portray itself as diverse and accepting, recent events regarding the Union and the Christ Church JCR (to name only a few from a never-ending list), not to mention Rhodes’ prominent position on the High Street, have made many realise that this continues to remain otherwise. Oxford’s recent statement that it “opposes racism on all forms” is hugely vague and disappointing, yet nevertheless characteristic and even somewhat expected of the university. Its failure to engage with the issues of anti-blackness surrounding current affairs (both outside and within the university) is ultimately telling. And even if the university claims to improve policies and promote change, the impact of these systemic changes can never fully be experienced until there is radical reform within the culture of racist elitism among its community, and by more aggressively improving access to students from Black and diverse backgrounds.

Until we all collectively work against Oxford’s access problem, learn to call out complicity and ignorance, alongside normalising these difficult, uncomfortable conversations, I am afraid that my experience will remain merely one of many similar stories from students of colour.