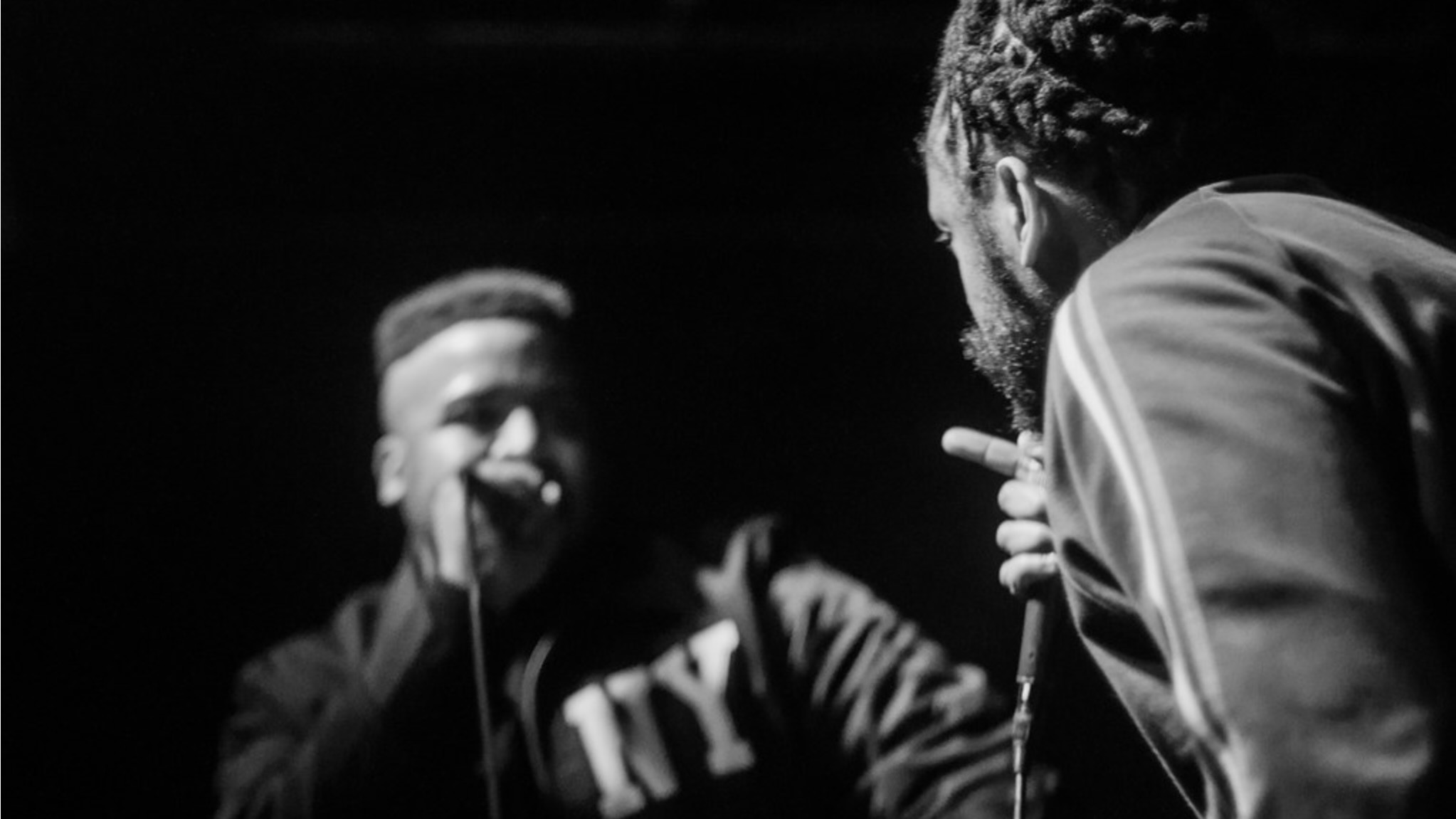 When it comes to the underground, abstract hip-hop scene, few names hold as much weight as Billy Woods. Being a part of the underground since the early 2000s, his borderline shouted delivery, plus his cryptic and complex lyricism has aged like a fine wine; with woods arguably being at the peak of his powers. And if we’re talking abstract hip-hop, few artists embody the genre quite like E L U C I D, with energetic and intricate flows that work in perfect metaphysical tandem with his esoteric lyrics. To have just one collaborative album between these two would be amazing, but thankfully, Haram serves as Armand Hammer’s seventh project together, and also might be their peak, coming together with the legendary Alchemist to give us one of the best rap projects in recent memory.

The album opens up with ‘Sir Benni Miles’ with The Alchemist setting the bar high with the production. The beat is built around these warped synths that are coloured in a deep crimson: dark, dirty and bloody; while the drums are slow and meditative with wind chimes blowing in the background of the mix. Subtle, bright keys linger with the chimes, as sporadic vocal samples cut through the production to always keep you guessing. woods is the first to bless us lyrically on this album, and he does not disappoint at all, but then again he never does. Immediately, woods brings a dark and sombre mood with the opening bars, “Dreams is dangerous, linger like angel dust, Ain’t no angels hovering, ain’t no saving us…” The nihilism is ever present in woods’ music, and here it is no different, warning listeners of optimism like its opium, a drug which we use to ease the horrors of life, but it will ultimately never save us from reality.

While E L U C I D appears on the opening track, ‘Roaches Don’t Fly’ feels like his true introduction on this project. The stellar production continues here, with clashing of dark and light synths, with a driving drum beat that follows perfectly from the previous track. E L U C I D riffs on this track in his classic abstract ways with some fantastic bars: “My new name colonizers can’t pronounce, Bounce per ounce, more, what counts? Kill your landlord, no doubt, Asymmetric unconventional extremists, Make meaning, cream zenith, Lead with my left, beam freedom…”, serving as a witty yet powerful critique of the right.

The bewildering production continues onto ‘Black Sunlight’. ‘Black Sunlight’ has these beautiful and bright blinking synths atop a deep and detailed sax lead and jazzy and triumphant drums with vocal samples from KAYANA creating an ethereal feeling. On this track, my favourite bars of the whole album appear from woods: “Iridescent blackness, Is this performative or praxis? Are we talkin’ about practice?” Here, woods is critical of performative activism, calling out whether people preach for black empowerment for the sake of equality or whether it is merely a for their own image in vain hypocrisy, while nearly rhyming the entire scheme together, and referencing Allen Iverson’s classic “practice” press conference.

In the second half, we get some guest appearances that are much welcomed. On ‘Falling out the Sky’, Earl Sweatshirt opens up the track with an incredibly personal verse dealing with his father’s death: “I be with nobody who know what’s goin’ on inside, My father swollen body behind my eyes, I ain’t cry for him in time…” The melancholic verse is offset by the bright and blissful production that sounds almost G-Funk with its bright strings and synths that coat the drums and vocal samples in sunlight.

My favourite feature however comes on the incomparable ‘Chicharrones’ with Quelle Chris. Twisted, descending horns open with a haunting rhythm as shrill chimes and sirens echo back and forth in the mix. The drums are slow and pacing like a death march that creates a supreme darkness that Armand Hammer and Quelle Chris relish in. From the title of this track, to the name of this album, to the severed pig heads on the album cover, it is obvious where Armand Hammer stand on the police system, and ‘Chicharrones’ works as a genius critique, discussing police brutality and the thought process of those who perpetrate it: “I just work here, I’m not the boss”, standing to absolve them of the systemic racism that they uphold and enforce.

I don’t have the space to discuss the mind-bending ‘Peppertree’, or the phenomenal closer ‘Stonefruit’, with its whitling and screeching synths that E L U C I D serenades over with a gorgeous flow and tonality before woods comes in with a darkly beautiful shouted verse; but I digress. Haram stands as arguably some of the best work that any of the three artists involved have ever worked on, and for me, is easily the album of the year so far, and a soon to be staple in the genre.

Image credit with permission from Edwina Hay via Flickr