Setting the bar high: On running the college bar

Jill Cushen speaks to the bar managers of Regent’s Park and Balliol bars about the job, the drinks and the joy of running a student bar. 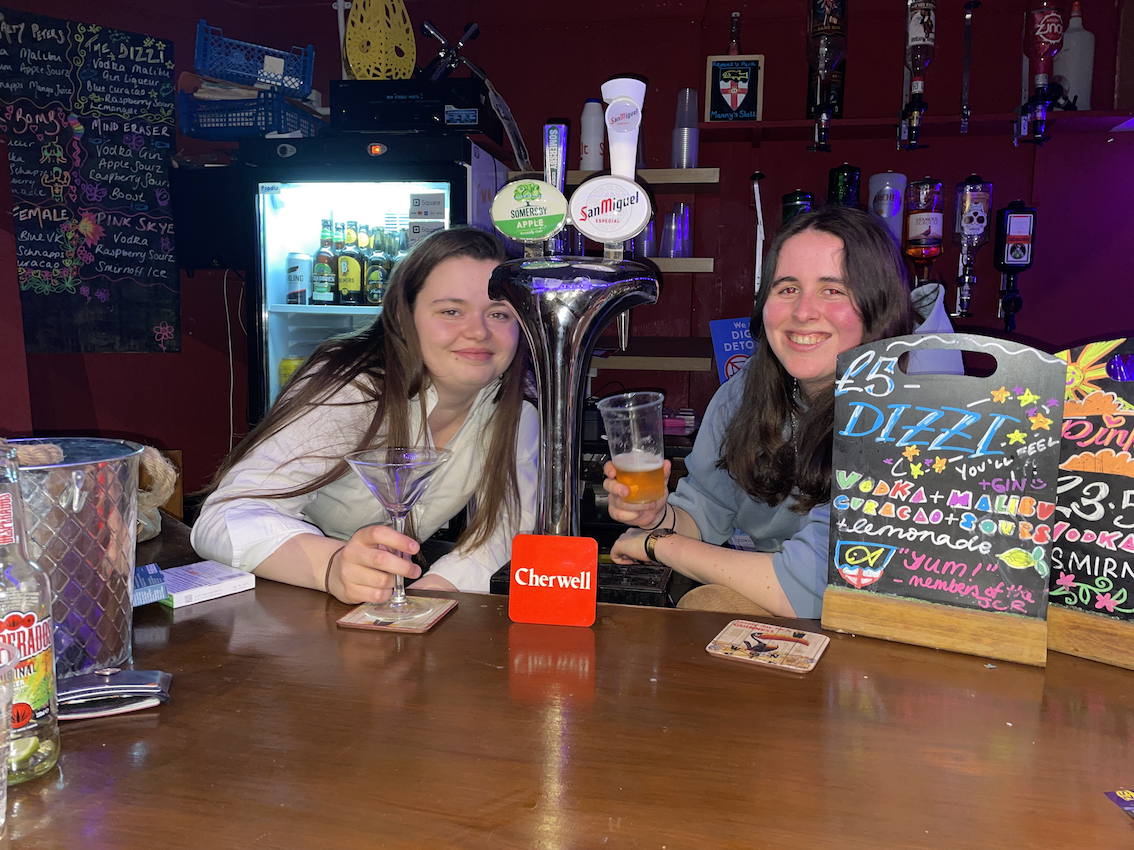 Nestled behind the dreaming spires, cobbled streets and well-kept quads are some of the most beloved, and most frequented, spots in Oxford – college bars.

Serving as a venue for members to socialise and drink at Spoons rivalling prices, almost all colleges have a cherished bar, but few remain student run. Solely in the name of a journalistic endeavour, I took it upon myself to visit two such bars, spend another evening surrounded by alcohol under the pretence of it being my Cherwell duty, and find out exactly what it means to run a student bar.

Regent’s Bar, or what was more recently named ‘Manny’s Shell’, is one of the cheapest bars in Oxford, sitting snug behind the College’s JCR. Bar Manager Amelia Sellors runs a tight ship, and tells me that it’s her job to keep the bar running ‘no matter what it takes’.

‘We pride ourselves on having the cheapest drinks in Oxford. £1 a shot, mixer is free, £1.90 a pint. The prices are unbeatable – it’s because each year we aren’t trying to make a profit. It’s just a pub for the students to enjoy however they wish.’

The bar’s motto is ‘cheap and cheerful’ but there’s more to it than low prices and chipper bartenders. From ordering stock and dealing with suppliers, to the maintenance, cleaning and training of the staff of twelve, running the college bar is no mean feat. ‘It’s for the students by the students’, Amelia says, ‘And to make sure the bar stays fun, you have to be pretty rigorous about the behind the scenes stuff’.

I wonder what kind of bar manager she is. Feared, she says, and given that one of her many nicknames in the bar is ‘Mussomimi’, I’m inclined to agree: ‘It would also be a bit egotistical to say I’m beloved. I’d say as long as the bar is beloved then I’m happy.’

Even on a quiet Monday evening, Regent’s Bar is cosy and lively. The small, wood-panelled room is decorated with old photos of the college, a collage of many flattering photos of its patrons and an array of other random objects. It’s proximity to the JCR means that if you’re not vibing with the staff’s eclectic mix of tunes in the bar, you can have a game of ping-pong, table football or darts. I’m also informed that the Wii is the greatest thing to come to Regents since Manny the tortoise.

Allowing the powers of Regent’s most popular drink, ‘The Dizzi’, to kick in, I head over to Balliol to see if the incumbent Lady Lindsay, Hannah O’Connor, is running the bar into the ground or just running it beneath the ground. ‘The Lindsay’ has long been a famously good watering hole, and after being shut for over two years due to water damage and refurbishment, it is back and better than ever.

A world away from the intimacy of Regent’s, Balliol’s bar is a spacious underground haunt. Serving up a spectacular line up of drinks from the legendary ‘Balliol Blues’ to Lady Lindsay’s experimental peach margaritas, the bar has a sophisticated air but is equally welcoming and spirited.

While the cocktails are shaken, I ask around among the many unbiased customers what makes Balliol bar so special. ‘I just love it here’ a non-Balliol reveller tells me, ‘it’s the vibe, I don’t ever want to leave when I come in’. The best thing about Balliol bar? After the drinks, it’s Lady Lindsay herself, I’m told.

‘I’ve managed to make the bar profitable without losing any of its essence’, Hannah says. ‘There are no frills, it’s just a great space and should be a place that students want to go to. I do put a lot of work in but it gives me such joy when I see it bustling with people all drinking and having a good time’.

I listen to the pair complain about the weight of their duties, dealing with irritable suppliers and the recklessness of certain bar users all evening. So why do it? Why have a student run bar if it’s just another headache? Spending the evening in the bars, I get the sense that both bar bosses manage to blend the fun and chaos of the job with the gravity of the responsibility.

‘You don’t rant about something you don’t care about’, Amelia tells me, ‘It really doesn’t make sense to have a college bar run by students, it’s not rational but there’s something irreplaceable about it. Because we’re student run, we’ve got something that no other bar has – a lot of love and pride for it and that’s what makes it so special.’