Meg Lintern reports from the protest. 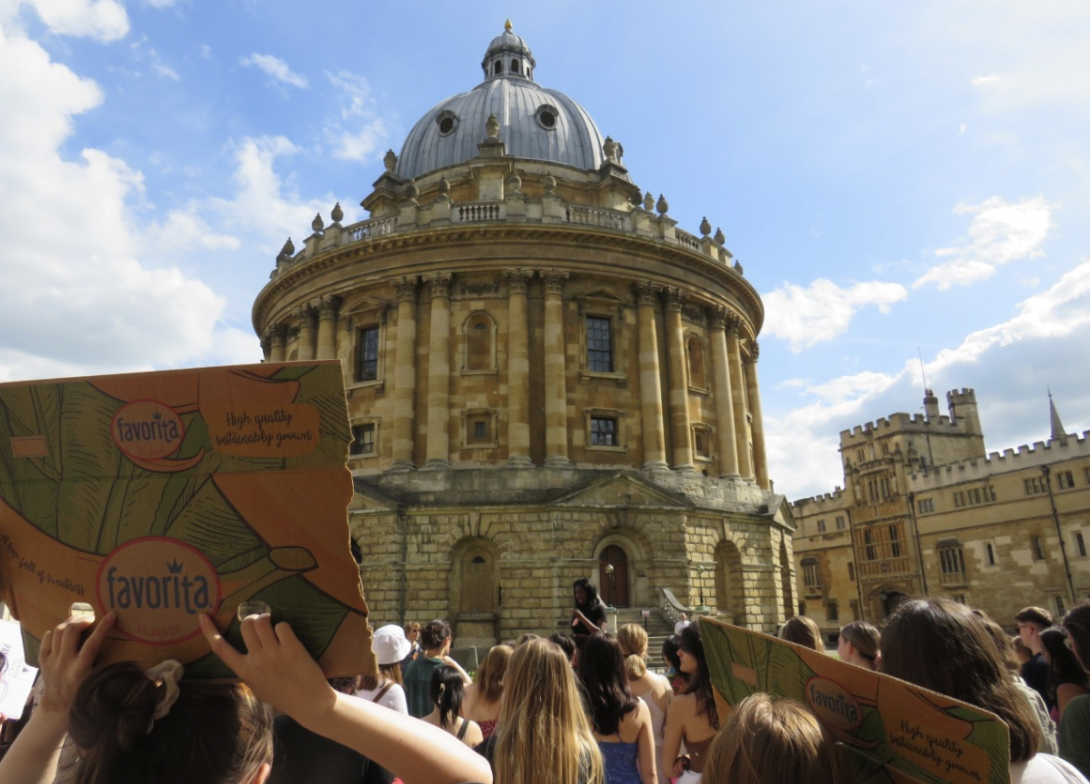 Meg Lintern
Meg is a Deputy Editor-in-Chief at Cherwell who oversees Features, Innovations, and The Rag. She's also a second-year history student at St Catz.
25th May 2022

On Sunday 22nd, crowds of students convened outside the RadCam as part of a protest organised by Not Here, Not Anymore (NHNA).

NHNA is a student campaign aiming to fight against the use of Non-Disclosure Agreements (NDAs) in colleges and push Oxford University towards improved sexual assault policies. It is associated with It Happens Here, a group linked to the Oxford Student Union which has been promoting a safer university environment free from sexual assault since it was founded in 2013.

During the protest, a series of speakers voiced the demands of NHNA and described their personal experiences of the cultures of “silencing and victim blaming” that exist within Oxford University.

The first to speak was Maia Hamilton, the co-chair of Oxford University Labour Club. She read aloud the open letter which NHNA has addressed to Oxford University and published on their Instagram linktree. She said: “Oxford can and must do better to prevent sexual assault amongst students and protect survivors. To take up your place to study at one of the most prestigious institutions in the world should not mean you forfeit your right to learn in a safe environment. Education should not cost an exposure to danger.”

Hamilton voiced concerns that Oxford’s collegiate system makes it particularly difficult to tackle systemic sexual misconduct, since each of the colleges has an independent set of policies and procedures. She said: “You should not be at a higher risk of being assaulted or mistreated in the aftermath of sexual violence based on your college.”

Widespread calls for the universalisation of sexual misconduct policies across Oxford colleges have followed in the wake of high-profile failures by colleges to protect survivors. In 2021, a postgrad at Balliol described how she was treated with “hostility” after making a complaint about sexual assault, and in March, LMH was accused of using NDAs to silence a victim of rape.

In light of this, NHNA’s open letter states that “all colleges should adopt the same sexual misconduct policy so students are not forced to gamble with their safety based on where they are accepted or pooled to”.

Kesaia Toganivalu subsequently addressed the audience, saying that she was “sick of seeing well meaning infographics but no actual change”. She described her own experience of sexual assault, having been attacked by “someone I knew and trusted”, and she stressed that “it is not the job of survivors to beg [for protection]”.

She criticised the University for worsening the trauma of survivors: “How are survivors meant to be able to heal if rusticating has such big stigma?”

“I have the same punishment as the person who assaulted me,” Kesaia continued, referring to the responsibility generally placed on survivors to avoid environments where they might encounter their assaulter. “[Colleges] are rich as hell, they can afford to care, but they just don’t. I’m f***ing sick of this system and it needs to change.”

Hannah Hopkins, women’s rep at St Anne’s, added: “I’m so tired of Oxford not addressing things as they are, and caring more about reputational damage than the safety of students living there.

“Rape in most cases is legal in Oxford colleges… cases are run by professors who aren’t trained.”

Discussing the role of NDAs in Oxford colleges and the urgency of banning them, Ffion Samuels, LGBTQ+ rep of It Happens Here, said: “NDAs are forced onto survivors who are terrified… we need to put pressure on colleges in all directions.”

The NHNA campaign is actively urging JCRs to lobby their colleges to ban the use of NDAs. So far, only LMH and Keble have signed a pledge to stop using them, but Ffion argued that “we can force every other college to change.”

Jeea and Nicola, the two co-chairs of It Happens Here, were the final speakers at the protest. They stated that “sexual violence is one of the biggest threats facing our students today”, but urged students affected to turn to the resource guide circulated by It Happens Here and NHNA for guidance and support.

With a growing Instagram following of 545, the NHNA campaign is gaining traction. Having posted an image of the NHNA sticker covering the O of the Oxford Union sign, it seems that their mission is to not only tackle cultures of abuse in colleges, but also within Oxford’s societies, ultimately pushing for a more coherent and legible approach to sexual violence across the University.