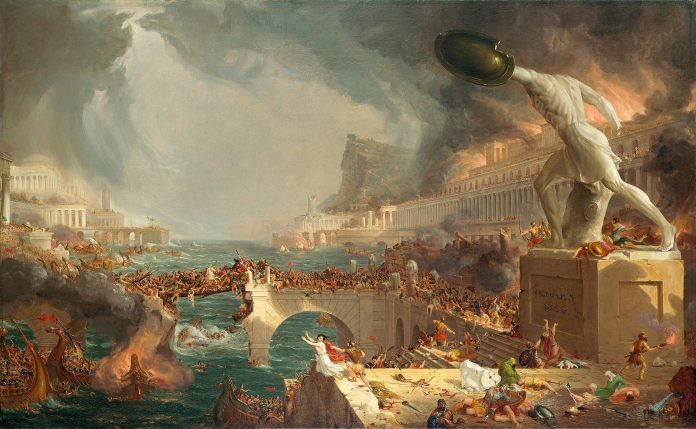 When my Mum first met my Dad, she declared to all in the pub that he was “the sort of man that listens to R.E.M”. He didn’t mind: his hearing’s crap and he thought she was pretty. But it does mean I have the band somewhat to thank for being born. That kind of gratitude only gets the Yankee 80s crooners so far, however. Especially when one of their greatest hits is the soundtrack of our age. Wherever you go, there are those declaring it’s the end of the world as we know it

It was hardly going to be Shiny Happy People, was it? It’s not hard to guess why it’s playing ad infinitum. We see Australia in flames, dozens dying of coronavirus in China and quivering international commentators declaring Iran and America are on the verge of World War Three. The 2020s seem to have ushered in a Gotterdammerung of misery and terror. That’s before we’ve even left January. And the European Union.

But, dearest reader, I think we should take a leaf out of The Hitch-Hiker’s Guide to the Galaxy, famed throughout the, erm, galaxy for having written on its cover in big, friendly letters: Don’t Panic. From Greta to CNN, FBPE-types to Westerners visiting China, we all need to take a collective chill pill. Maybe with a bottle of Corona. Though it does taste shite, even without the unfortunate connotations.

How can I be so blasé? After all, we keep hearing ad infinitum that “the world is literally on fire”, that Brexit’s broken Britain or Trump’s going to bomb Iran to boost the rating of Fox and Friends. Now, I’m no climate change denier or Trumpista. I’m a Brexiteer, but nobody’s perfect. In fact, I’m something even worse than any of those. I’m an optimist. But this isn’t blind faith, a gullible intransigence in the face of disease, fire and chlorinated pestilence. No, I’m an optimist because I’ve been exposed to some inconvenient truths (a phrase my Editor’s hoping isn’t copyrighted).

Too often, we hear only the shrillest voices or the worst news.  By doing so, we miss the far more positive reality. The fires in Australia are awful, and the global climate is certainly changing. But the idea the “world is on fire” is nonsense. NASA data shows the instances of wildfires globally dropped by a quarter between 1998 and 2015.  Pretending otherwise detracts from efforts to reduce emissions and makes the climate debate far more contentious than it should be. Similarly, every death from the coronavirus is a tragedy. But in 2005 the World Health Organisation, as highlighted by The Spectator’s Ross Clark, predicted up to 50 million deaths from bird flu. The actual number was 482. These outbreaks are containable. As far as I know, the Third World War hasn’t yet broken out. And the previously anti-Brexit IMF predicts Britain will outpace France and Germany in growth over the next two years.  The news is not as bad as you’d think.

More importantly, global poverty is a sixth of what it was sixty years ago. There are more people obese than living in famine for the first time ever. Child mortality is the lowest it’s ever been; so are the numbers of those dying in conflicts. There’s never been a better time to be alive. Ignore those telling you it’s all going to hell in a Trump-driven handcart. Back sensible measures to help the climate, don’t write off Britain and hope the Democrats find a decent nominee. If so, asides from death, taxes and hangovers, the future’s looking bright.

By the way, my Dad doesn’t really like R.E.M. He actually listens to a lot of Gary Numan. Which I’m glad he didn’t tell my Mum, or he’d have been stuffed.