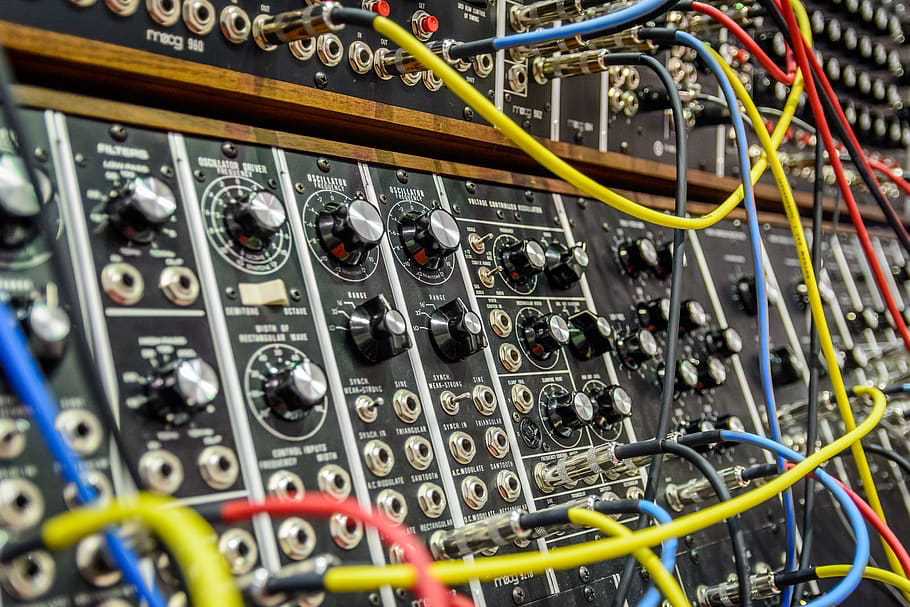 When anyone brings up the topic of electronic instruments, it is always very easy to dismiss it. They are casually taken to be a crutch for artists like Britney Spears, One Direction, or Ke$ha, musicians often considered untalented and image-based. And unmarketable without elements like autotune. They are a cheap tool used to keep the music sounding ‘acceptable’. A clean, polished product, ready to be sold.

To challenge this image of electronic music, I’ll first establish why these instruments and techniques are used. There’s a huge difference between an executive demanding a song be ‘cleaned up’ for popular consumption and a work like Karlheinz Stockhausen’s Gesang der Jünglinge (1955-56), widely recognised as the first piece of electronic music. Electronic techniques aren’t new. The Theremin, an electronic instrument patented in 1928, creates an eerie, swooping sound (heard on Portishead’s Dummy, for example).  Another good example would be the solely electronic piece ‘Artikulation’ (1958) by the Hungarian-Austrian composer György Ligeti. Here, the art is inseparable from the instruments.

Electronic instruments are present throughout the 20th century, with their influence exploding in the latter half. ‘70s avant-garde rock group CAN, on their 1971 album Tago Mago, open the song ‘Oh Yeah’ with the entire track reversed, before playing it normally. By the halfway point, the strange ritualistic whispering and the silvery crescendos start to make sense: they are the cymbals and the vocals. From 1979, Jean-Michel Jarre was setting world records for concert turnout in this genre. Electronica developed from niche experimentalism into accessible popularity. There’s a perception of an urban-electronic and rural-acoustic split. However, on his two volumes of Selected Ambient Works, the highly influential Aphex Twin proves that Electronica can come from, and be inspired by, rural spaces. The genre’s expanse is undoubtedly far-reaching.

As for autotune, this computer-programmed technique was developed in 1997, adding to the ever-growing arsenal of electronic sounds. And it was swiftly taken up by Pop music. Listen to Cher’s 1998 comeback hit ‘Believe,’ which The Verge says turned autotune into a ‘bitchy shorthand’ for saying a person cannot sing. However, many Indie artists—traditionally guitar-heavy—use it unabashedly, such as Bon Iver in the haunting, mumbling song, ‘Woods’. In Hip-Hop too, with Kanye West on 808s & Heartbreak. It is clear that autotune can be artful. It just has a bad reputation, perhaps due to how widespread it has become.

JAY-Z, Death Cab for Cutie and Christina Aguilera have all denounced it. Michael Bublé too—but he admits to using it on chart-oriented projects. Everything must be perfect to succeed. Or, at least. it did in 2009, at the height of these intra-industry protests. Now, in an era of apparent ‘authenticity’, it is autotune (i.e. the surreptitious cleaning up of vocals) which is being rejected. Ke$ha recently showed great disappointment when her music was ‘corrected’ by her producer. In contrast, on Clairo’s album Immunity, we simultaneously find a song like ‘North’, labelled by The Guardian as ‘garage-rock’, beside the highly synthesised, autotune-drenched track, ‘Closer To You’.

Moreover, discussing Electronica at the expense of acoustic music frames the debate as a contest: one genre must dominate, the other must die. This is certainly not the case. Our generation, thanks to streaming platforms, is able to listen to bands from REM to Nirvana, keeping Rock and Grunge alive. Furthermore, one of the biggest movements right now is Indie Rock. This past decade has seen Indie acts like The Wombats, Blossoms, and Hozier acquire massive acclaim and popularity. I’d suggest that, generally, contemporary music hopes to be seen as less produced, as ‘authenticity’ becomes a prized attribute in a backlash against homogeneity. The ghostly presence of the producer behind the glass screen disappears when self-made artists such as girl in red and Post Malone find celebration on Soundcloud and YouTube. Electronic production is an accessible way to make music, shedding the negative associations of autotune and becoming more admired as a plausible mode of artistic expression.

Electronic and acoustic techniques are not mutually exclusive. Stylistic trends move in cycles. No technique ever really dies. The Electronica of the ‘80s gave way to the Grunge and BritPop of the ‘90s, just as the Electropop of the early 2000s gave way to contemporary Indie Rock. Like with any art form, there is always an ebb and flow. To dismiss electronic instruments is simply to ignore the music styles of the future… and, it is clear, the styles of today too.