In Conversation with Otegha Uwagba

Sasha Mills speaks to author Otegha Uwagba about navigating the creative industries, her time at Oxford, and her brand new book 'We Need to Talk About Money'. 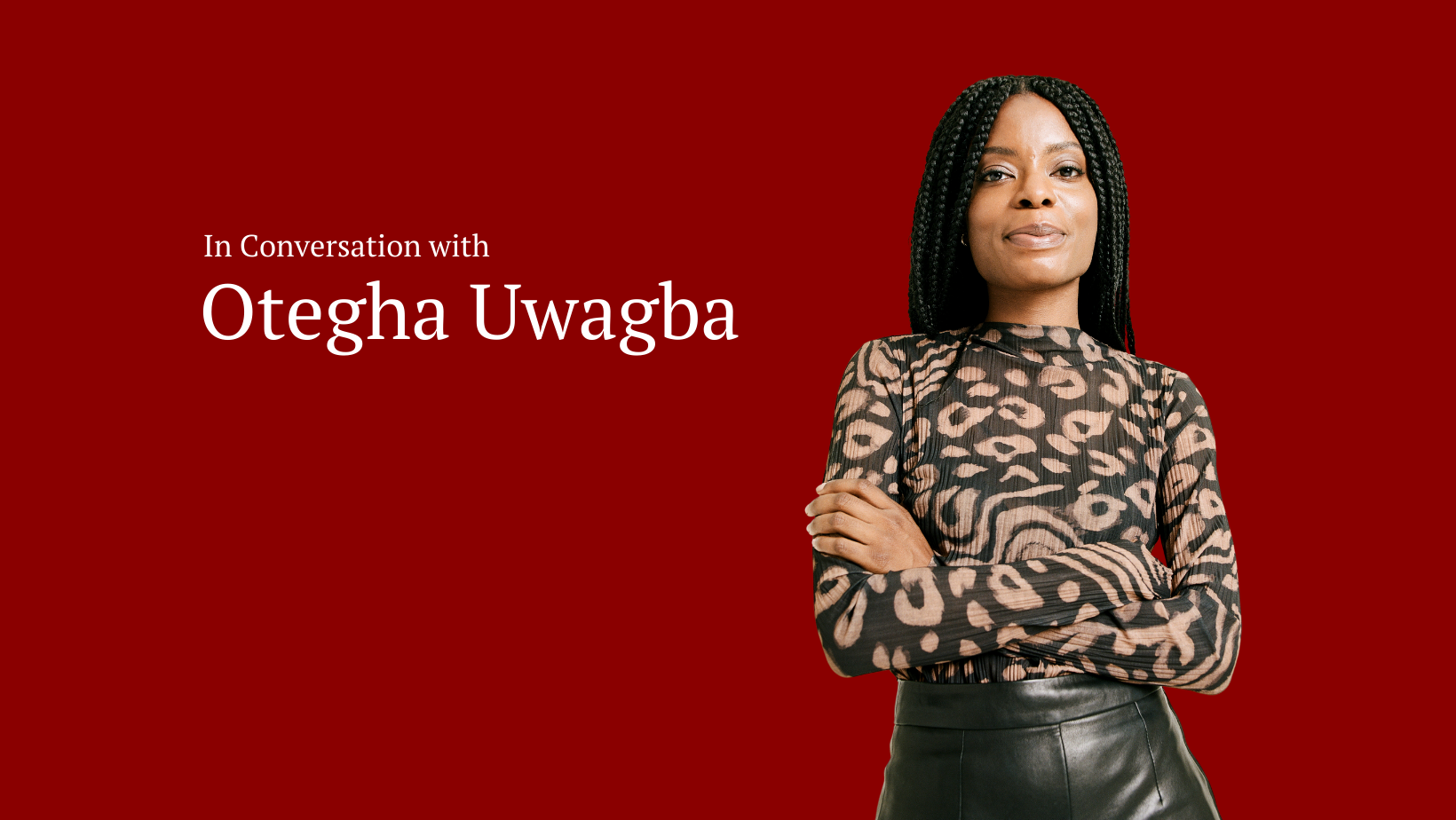 ‘I just remember walking home one evening and thinking, I need to write about this, I need to talk about this openly, because I cannot be the only one that feels this internal turmoil and this anxiety about money,’ Otegha Uwagba tells me at the start of our call. The sensation that she describes – this undercurrent of anxiety surrounding money – is one that feels personally quite close to home.

Otegha Uwagba is a two-time author, soon to be three, and all-around powerhouse. Her debut book, Little Black Book, made the Sunday Times bestseller list. Having spent several years in the advertising industry, she made a career change in 2016, launching her now-defunct working women’s collective Women Who and beginning her writing career. She runs the podcast In Good Company, where she interviews women about their work, although in its second season the podcast has broadened its remit to include the arts and culture more generally. For those that might want to pursue a career in media, Otegha Uwagba is the picture of success.

This perceived success is not something that Uwagba necessarily feels reflected the reality of her early writing career. ‘I just felt such a disconnect between the external persona that I was projecting and that people perceived, which was kind of this young, debut, author, and you’ve got interviews and book launches, […] which is really exciting and shiny, and just my internal anxiety about money, and what my future was going to look like. I didn’t know where my career was going to go.’

In her new ‘money memoir’ We Need to Talk About Money, set for release on July 8th, Uwagba charts her life so far through the lens of her relationship with money and work. The book, which I read after our conversation, is consistently and unapologetically honest. Uwagba never fails to shy away from the complexity of emotion that can surround money, class, and work, and with every chapter’s ending she eschews easy conclusions in favour of direct, telling honesty. Given the current vogue for discussing money and work online, as reflected in the publication of books including Sarah Jaffe’s Work Won’t Love You Back and the success of projects like Chelsea Fagan’s The Financial Diet, part of me expected the book to reach some easier to digest points – but per Uwagba’s signature approach, she refuses to oversimplify her experiences.

In the book’s second chapter, Uwagba describes her time at Oxford as a woman from a privately-educated background (she attended one of London’s top private schools on a scholarship). ‘I soon came to understand the significance of ‘the school question’, and the way that other students – mostly those who’d been privately educated – would politely ask about where you’d gone to school. Both question and answer are proxies, a fairly unsubtle way of probing into someone’s background and signalling your own credentials, as well as potentially unearthing any mutual connections; I am convinced that the privately educated in Britain are only ever two degrees of separation from each other’.

Although Uwagba graduated some time ago, this experience is one that every fresher here continues to encounter. Whether it be in our current government, or in more local spaces like The Oxford Union, it is difficult to escape the long-term connections fostered by Britain’s omnipresent private school network. When I asked Uwagba about her time at Oxford, she described it as generally uneventful, although she suggested that her private-school background may have cushioned her from experiencing the full alienation that students sometimes undergo in the city. For her, the economic imbalance between herself and her peers only became obvious after graduation. ‘I think for me, things really started to become clear after uni, when some people’s parents buy them flats as soon as they graduate, and stuff like that. And I’m like, ‘Wow, that is not my position at all.’ And that really became more and more clear as our 20s progressed.’

And it is to her 20s that Uwagba dedicates most of the book’s chapters. There is her time post-graduation, her ascension to the advertising department at media’s favourite wild child VICE, and her ultimate decision to move back in with her parents and start her writing career. When Uwagba and I started our call, she asked if I had been able to find any internship opportunities for the summer and whether I wanted to be a journalist myself. As I explained to her that I felt sceptical about the stability of the industry and offput by some of my peers’ comments about my desire for financial stability, it was clear that I had hit a nerve.

‘There’s an element of, you should do it for the love of it. You should create art, or design, or take photos for the love of it, which does drive a lot of people in those industries. I certainly do write because I enjoy doing it, I love doing it. And that’s the same with a lot of other creative workers. But then that’s almost supposed to partially compensate you. And it’s like, well, my bank doesn’t accept my love as legal tender,’ she says, with clear frustration.

This is a problem that is perhaps unique to the creative industry: lawyers and bankers are rarely expected to work for the love of it, but if you are a creative, the job comes with that as an unspoken rule. It is a rule that keeps pay low and working hours high. As Uwagba pointed out, ‘These jobs are really highly sought after, are a bit more glamorous, a bit more prestigious, a lot of people will do them. […] The economics of supply and demand means that that pushes wages down.’ Some of these problems are beginning to be reckoned with. In the time since our call, the New Yorker Union, who have been campaigning for almost 3 years, finally reached an agreement with parent company Condé Nast. Wages and benefits at the publication will increase, and N.D.A.s will be banned in cases of workplace discrimination or harassment. It still feels like too little too late.

It is clear from reading her book that Uwagba is all too familiar with the contradictions that underpin the modern creative industry. Her chapter on Girlboss feminism, a now widely despised mindset that found some level of popularity in the early to mid-2010s, is a place where she really leans into these complexities: ‘For me, and I imagine for many other women, that challenge is further complicated by my desire to thrive under the prevailing economic system even as I recognise its many flaws, and my understanding that doing so requires me to have a certain amount of capital’. Girlboss feminism has now been so widely deconstructed it has reached a level of memeification, but Uwagba is unashamed of exploring how it may have helped her break out of a male-dominated company in favour of stepping out on her own.

Given the book’s chronological structure, it seems only natural that our conversation should end on Uwagba’s recent success in buying a flat in London. Renting in the city is an experience that Uwagba describes both to me, and in the book, as nothing short of horrific. ‘I was just like, ‘Oh my god, I’m staring down the barrel of a gun of renting for the rest of my life.’ Even now, having successfully bought her home, she feels disillusioned with the problems in the UK’s current buying process. ‘Going through the whole process showed me how messed up it all is, and how difficult it is, especially if you’re freelance, and how many hoops you have to jump through.’

It’s a buying system that Uwagba describes as assuming certain things of those that try to enter it: that you have a ‘traditional’ job, that you are buying with a partner, that you are earning a significant amount even if you’ve been able to make rent that is the same as the mortgage that you’re applying for. ‘It made me even more angry about how fucked up the system is. Because I’m like, everybody should be able to have this. And you shouldn’t have to make a lot of money to be able to do it. And the reality is, I had made much more than the average salary in the year or two leading up to it. […] It’s impossible to do on an average salary in London, you have to be earning well above average, you would ideally be buying with a partner.’

So, what are the solutions to all of this? On a personal level, Uwagba feels that the partial solution to her own financial anxiety was, somewhat unsurprisingly, having more money: ‘I’d say my relationship with money only started to improve in the very tail end of my 20s, which coincidentally, was when I started to make more money, and also started to feel like, okay, I am on a career track where I can actually probably make a decent amount.’

But on a broader social level, I wondered whether the book’s title suggests that talking about money might be a solution in itself. Uwagba corrects me here: ‘I don’t want to say that just talking about money on a really micro level is going to solve all of your problems, because I think that is the message that a lot of people in the finance space are pushing”, she points out. ‘When I say we need to talk about money, I mean it on a much bigger socio-political scale. We need to talk about who has money, how they got it, why they got it, who doesn’t, how that came to be and how all of those differences affect our individual experiences of the world, so that we can start thinking about what needs to be done about how money is made, and spent, and shared, because fundamentally it’s very unfair.’

We Need To Talk About Money is available to preorder here now.