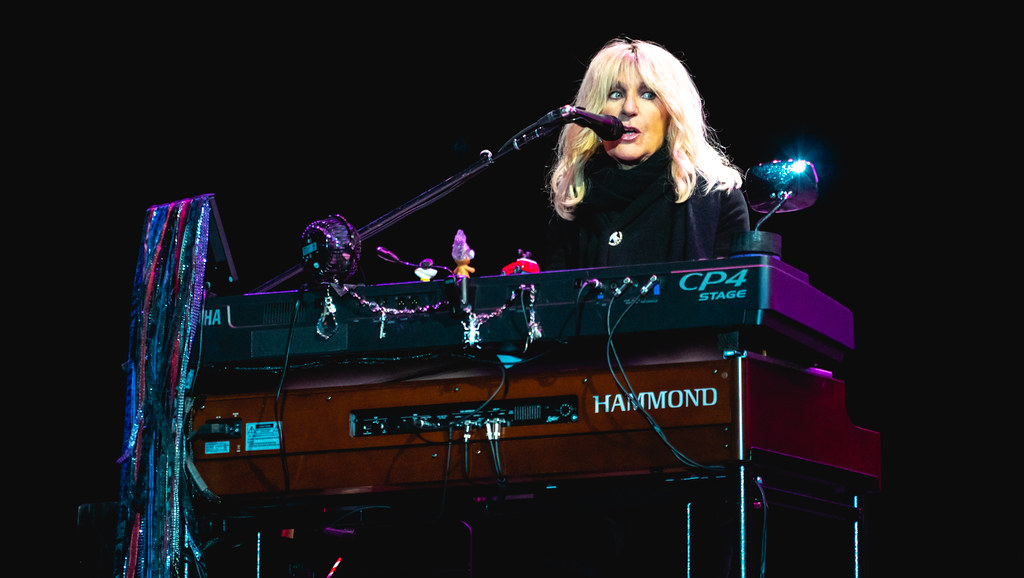 I had just hit send on my English coursework (three cheers, finalists) when I got a text from my brother consisting solely of a screenshot of a news headline. Christine McVie, Fleetwood Mac’s vocalist, keyboard player and longest-serving female member, had died that day.

As an unashamedly passionate Fleetwood Mac devotee (recently informed of this fact once again by Spotify Wrapped), and knowing far too much about the lives of its members as well as their music, this one hit home. As I write, I’m glancing up occasionally at a picture of Christine I’ve cut out from a newspaper and temporarily stuck on the wall. Striking eyeshadow, platinum-blonde 80s hair and a suave smile: there she stands in all her glory.

Fleetwood Mac has a long history, its style ever-evolving and musicians coming in and out. By far their most well-known lineup, comprising Mick Fleetwood, John McVie, Christine McVie, Lindsey Buckingham and Stevie Nicks, recorded and performed periodically from 1975 until 2018. A union forged in musical heaven, the harmony of the members’ creative relationships simply could not carry across to their romantic ones. It was amidst breakups, bitterness and boozing that the iconic Rumours exploded onto the scene. Frequently hailed as the greatest breakup album of all time, its eleven tracks weigh heavy with grief, rage, triumph and yearning, bearing an emotional energy that has resonated with millions. Though many see the saga of Stevie and Lindsey’s broken relationship as the backbone of the album, the songs of Christine McVie shine just as brightly. Charged with hope and joy, aching with romantic wisdom, they are the songs of a woman who has lived and loved.

Christine McVie held the band together. She often appeared the calmest and most aloof onstage and in interviews (and also, I hasten to mention, one of the best wearers of jeans out there). She wrote and performed an enormous variety of songs, from gut-stirring ballads that made John and Mick weep offstage (see Songbird below) to heart-soaring, earworm-worthy promises of a better tomorrow (Don’t Stop). Her low, lilting, silky contralto was the perfect complement to Stevie’s guttural rasp and Lindsey’s higher-pitched vocals, but also moved listeners as a solo voice, and continues to do so.

Christine was surrounded by music from an early age. She was classically trained, discovered the blues through a Fats Domino song, and in 1967 joined the band Chicken Shack. Meanwhile, another blues band, signed to the same record label, was touring: this band was Fleetwood Mac. Christine met the bass player, John McVie, and they married in 1968. In 1970 she joined Fleetwood Mac as its first female member; five years later the band welcomed struggling LA-based musicians Lindsey Buckingham and Stevie Nicks after losing their guitarist, Bob Welch. This Anglo-American mix of male and female talent had rarely been seen in rock and roll. Fleetwood Mac was definitely on the way to stardom.

However, being in the same band together meant that the McVies’ marriage had begun to fray. In a 2019 BBC Four documentary entitled Fleetwood Mac’s Songbird – Christine McVie, Christine confessed the difficulty of this period in her personal and professional life. ‘To write songs about each other and perform them. How it ever happened I’ll never know.’

While Lindsey and Stevie’s tempestuous relationship famously continued to fuel their music for decades after Rumours, Christine wrote and performed in a manner more subdued and restrained, but never short of masterful. Her elegance, poise and sense of fun resonate in every song. From her earliest work her individuality and vocal skill is evident, including her (sadly unsuccessful) solo album Christine Perfect (1970). Though I believe that every one of Christine’s songs are deeply worth their while, I’ve picked out just a few: an ensemble I think captures the range and depth of emotion and talent.

Keep on Going (Fleetwood Mac, Mystery to Me, 1973) Although this bassy number was composed by guitarist Bob Welch, Christine was the lead vocalist. Funky, bluesy, nonchalant, she’s gonna keep on the way she’s going.

Over My Head (Fleetwood Mac, Fleetwood Mac, 1975) Fleetwood Mac’s first album with its new lineup reached No. 1 in America. Slow and smooth, accompanied by a gentle but complex guitar line.
Your mood is like a circus wheel
You’re changing all the time
Sometimes I can’t help but feel
That I’m wasting all of my time.

‘You Make Loving Fun’ (Fleetwood Mac, Rumours, 1977) Buoyant and zestful, Christine wrote this one about Fleetwood Mac’s lighting director, Curry Grant, whom she was seeing after her breakup with John.

Songbird (Fleetwood Mac, Rumours, 1977) Hear the first few chords and your surroundings are guaranteed to melt away. The band usually saved ‘Songbird’ for the encore, leaving Christine alone onstage with a grand piano. She said that the song, words and all, came to her in the middle of the night, and in the absence of recording equipment she had to stay up playing it until morning so she wouldn’t forget it.

I’ve been in love
And I’ve lost
I can count the tears
But I can’t count the cost.

Reminiscent of the positive, forward-thinking hits of Rumours, this solo venture is an absolute joy.

Everywhere (Fleetwood Mac, Tango in the Night, 1987): Twinkly and sparkly, this is one everyone knows. I’d recommend listening to the version from the band’s live album, The Dance (1997), in which Christine works musical magic with her voice and three maracas. Bouncing to the beat is a given. I’ve put a link here for convenience. Go on…

After The Dance concert, Christine left the band and moved to Kent. She performed onstage with Fleetwood Mac a few times afterwards, finding that the quiet life perhaps didn’t suit her after all, as she admits in the documentary. Fleetwood Mac was her band, and she was its beating heart. In a statement issued after her death, the band called her “the best musician anyone could have in their band and the best friend anyone could have in their life.”

“For you, there’ll be no more crying
For you, the sun will be shining.”
(Songbird)