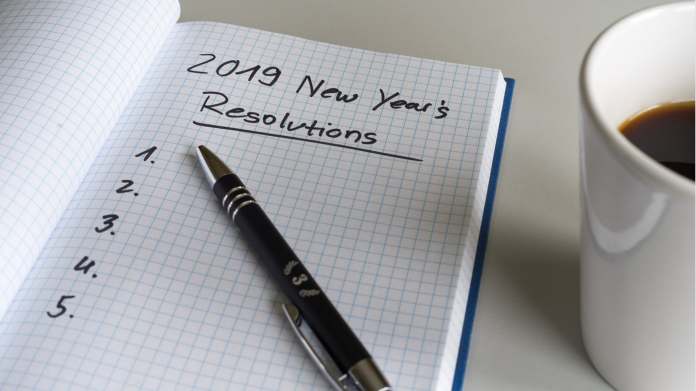 Picture this: you’re at a family gathering that’s taking place between Christmas and the New Year – the period of limbo, when no-one knows what day it is or what they’re supposed to be doing. There’s too much food and the drinks are flowing. Your distant aunt-something-or-other, whom you haven’t seen since the last annual family gathering, sidles up to the dessert table, eyeing the tiramisu. She takes a sizeable portion, along with a few other sweet nibbles. As she’s moving away, she catches your eye. A guilty look passes over her face. With an embarrassed laugh, she assures you of one thing, which happens to be the same thing she tells you every Christmas: ‘I’ll start my diet next year.’

If your family and friends are anything like mine, in the weeks leading up to the new year and in the first few weeks of the new year, the same old mantra is bandied about without fail: ‘New year, new me’. And yet, by the time January 31st rolls around, your best friend has already broken her vow to spend less money on clothes (the ASOS New Year sales are invariably her downfall), your little brother has broken his vegan pledge with a bar of Cadbury’s Dairy Milk and that tiramisu-loving aunt from the family gathering has not been able to resist the donuts at the weekly office meetings.

I, too, have been responsible for making empty promises the moment the clock strikes midnight and breaking pretty much all of them in the few weeks that follow. In the past, I’ve resolved to do everything from getting more organised, to writing in my diary every day, to exercising more often and practising more self-care. Though some resolutions have lasted longer than others, none have resulted in a long-term change. I’ll be organised for a week, then devolve into my usual messy habits for the rest of the month, and this process will repeat itself for the rest of the year, until I promise myself – once again – that I’ll get more organised in January.

Ultimately, I think not. From my numerous unfulfilled resolutions, there is one thing I’ve learnt over time: the very concept of a New Year’s resolution sets you up to fail from the get-go. It’s an unrealistic promise to suddenly break all your old bad habits on January 1st and maintain this impeccably until the 31st December, a promise to transform into a ‘New Me’ merely overnight and banish the ‘Old Me’ to the deep recesses of the past, never to be seen again. Not only is the impulsiveness of New Year’s resolutions a recipe for failure, but also the fact that resolutions tend to be too ambitious. Perhaps there is something about the monumental striking of the clock at midnight that inspires within us a desire to monumentally change our lives. In reality, small, consistent and gradual changes – which can be adopted at any point in the year – will lead to greater changes overall. Furthermore, there is something illogical about the fact that, though in our goal-oriented society we’re constantly striving to better ourselves, many of us wait until the new year to finally make a change. This only fuels procrastination – how many of us have found ourselves gorging on as much junk food as possible, because the new year is quickly approaching and we’ve decided that we’re going to start eating healthily when it begins? Why do we always wait until tomorrow to better ourselves?

If you’ve succumbed to the annual tradition once again and have already made your New Year’s resolutions, good luck; I hope you are part of that 8% who stick to them. If you have yet to make yours, be realistic, devise a plan and start off with something small. And, if you have no desire to make any New Year’s resolutions whatsoever – good for you.

Vessel: In conversation with Grace Olusola