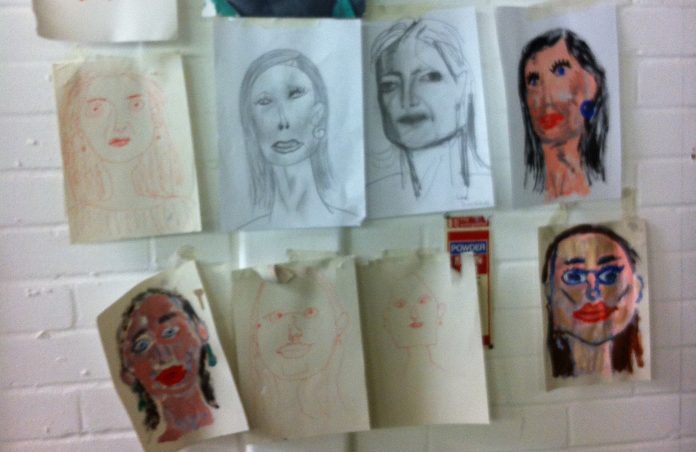 Bad Art. What makes you add that adjective? ‘Bad’. Is it style, medium or content that defines taste?

On my Art Foundation course we decided to once again procrastinate on our final projects and figure it out. Maybe by finding this out, we can save our own art from that ‘bad’ art title it very definitely was.

It all started when my friend showed me another friend’s GCSE final piece. Her friend wasn’t happy with it. She had spent ten hours straight attempting to recreate a two dimensional Ruby Rose. She felt that she hadn’t succeeded. I looked at the photo. It was incredible in its clarity: I could see that it was meant to be Ruby Rose, but something was not quite right. It just looked bad.

The bad art was inspiring. We wanted to do something similar. We attempted to create a portrait, but to purposefully make it fail. This is not to say that failure was not something that we encountered often, but this time it was deliberate.

We picked Angelina Jolie. Often crowned as one of the most beautiful women in the world, she was the image of perfection that we needed to start with. We replicated her five times, each time creating a face that was nearly – but not quite – right.

Attempt One: our rushed and hurried marks crudely collaged to make a face. It was not successful and appeared too much like an abstract portrait. It was not obviously ‘bad’ enough.

Attempt Two: the eyes were off. Eyes are crucial in portraits as they are usually what the viewer automatically searches for. Natural eyes need to be at an angle, skewed and pupils facing just in the wrong directions.

Attempt Three: skin tone. We used grey as shading on a pink face. Needless to say, this was not successful, and gave the appearance of a beard.

Attempt Four: We over-dramatised her features. It looked like a caricature gone wrong.

Attempt Five: This time she had an irregular face size. Again, this was unsuccessful; the angular shape appeared like a rip-off copy of Expressionist art.

What we realised about ‘bad art’ is that more than anything, the crucial element is time. Like the hilariously bad celebrity drawings done by fans, we needed to spend excruciating time and effort, pouring our hearts into the work. Time was spent trying to shade, to dot, to draw. In our one-day self-proclaimed project, this was something we just didn’t have.

We also realised another thing. The drawing needs to try to imitate real life – try being the operative word. It needs to try to replicate the person before it, and any differences from the person and the portrait must be a lack of skill, not a result of creative interpretation.

It is often said of Picasso that his success in painting his radical portraits was made possible after he demonstrated he could do things the ‘right’ way. Picasso’s cubist portraits – in which his subjects have two eyes on one side of their heads and noses emerging from their foreheads – are preceded by a mountain of his earlier work, which is all strikingly in proportion.

There needs to be an attempt to get the features in the right proportions for there to be a result in which they are not quite there. It was through this little feat, we realised what makes the great masters great, and us just another group of ‘bad’ artists.

Why we should care about Warhol